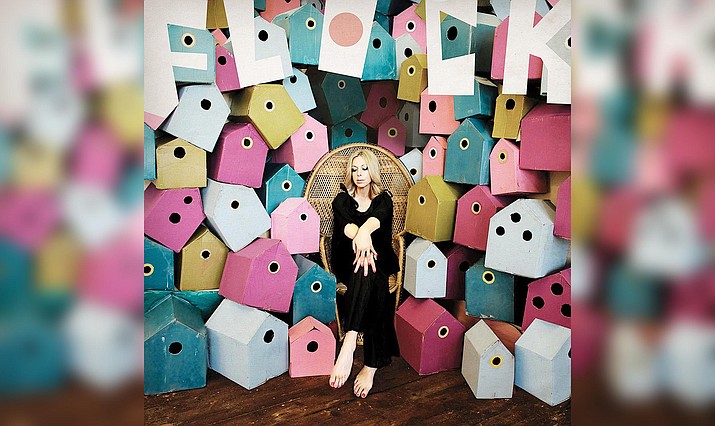 ‘Flock’ is the record that Jane Weaver always wanted to make, the most genuine version of herself, complete with unpretentious Day-Glo pop sensibilities, wit, kindness, humour and glamour.

A consciously positive vision for negative times, a brooding and ethereal creation.

The album features an untested new fusion of seemingly unrelated compounds fused into an eco-friendly hum; pop music for post-new-normal times. Created from elements that should never date, its pop music reinvented.

Still prevalent are the cosmic sounds, but ‘Flock’ is a natural rebellion to the recent releases which sees her decidedly move away from conceptual roots in favour of writing pop music.

Amongst this broadcast of glistening sounds is ‘The Revolution Of Super Visions’, an untelevised Mothership connection, with Prince floating by as he plays scratchy guitar.

Tracks include: Heartlow, The Revolution Of Super Visions, Stages Of Phases, Lux, Modern Reputation, Flock, Sunset Dreams, All The Things You Do.

As a rock icon and filmmaker with a unique vision, Rob Zombie has continuously challenged audiences as he stretches the boundaries of both music and film.

Zombie has sold more than 15 million albums worldwide, and is the only artist to experience unprecedented success in both music and film as the writer/director of eight feature films with a worldwide gross totaling more than $150 million.

October 2020 saw the release of the first new ZOMBIE track and video in over four years - “King Freak: A Crypt Of Preservation And Superstition” off of the forthcoming full-length album entitled The Lunar Injection Kool Aid Eclipse Conspiracy.

A classic Zombie album through and through with high-energy rages like The Eternal Struggles of the Howling Man and Get Loose to heavy-groove thumpers like Shadow Of The Cemetery Man.

Tracks include: Crow Killer Blues, The Serenity of Witches, The Much Talked of Metamorphosis, Hovering Over the Dull Earth, Shadow of the Cemetery Man.

Valerie June – The Moon And Stars: Prescriptions For Dreamers

‘The Moon And Stars: Prescriptions For Dreamers’ is the follow-up to Valerie June’s widely adored ‘The Order of Time,’ a 2017 effort that earned the admiration of Bob Dylan and landed on best-of-the-year lists from the likes of Rolling Stone.

‘The Moon and Stars: Prescriptions for Dreamers’ is a potent catalyst for that kind of magic. With her spellbinding vocals and infectious sense of wonder, June gently eases the listener into a far more charmed state of mind, one that quickly restores a powerful feeling of joyful possibility. With poster insert.

Valerie June, is a singer, songwriter, and multi-instrumentalist from Memphis,.

Her sound encompasses a mixture of folk, blues, gospel, soul, country, Appalachian and bluegrass. She has released five records, including her 2006 debut ‘The Way of the Weeping Willow.’

Tracks include: Stay, Stay Meditation, You And I, Colors, Stardust Scattering, African Proverb, Call Me A Fool, Fallin’, Smile, Within You, Two Roads, Why The Bright Stars Glow, Home Inside.