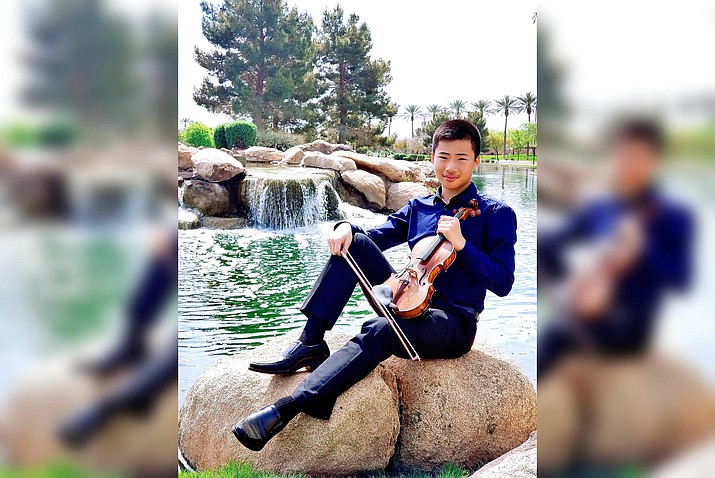 For the April 11 “Emerging Artist” concert, Ethan Yang will be the soloist.

The Verde Valley Sinfonietta will present the two remaining concerts of its ’20-’21 season–the annual “Emerging Artist Concert” on April 11 and its May 2 concert featuring the Clara Schumann Piano Concerto.

Both concerts will take place at the Sedona Performing Arts Center at 2:30 p.m. on Sunday afternoons.

Board president Al Vander Peut announced, “With the vaccination roll-out in this area proceeding well, and with the positivity rate declining, we are hopeful that we will be able to play to a live audience, albeit one of reduced size. We will be following Covid protocols, both with the audience and the musicians on stage. Our musicians are very eager to play again.”

Vander Peut added that the April 11 concert will be professionally videotaped for possible later access on the internet.

For the April 11 “Emerging Artist” Music Director Kevin Kozacek has engaged a young violin phenomenon from Phoenix, Ethan Yang, as the soloist in the Tchaikovsky Violin Concerto. Currently a sophomore at BASIS Chandler, Ethan began his violin studies with Phoenix Symphony member Jing Zeng at age 8.

As an avid participant in the competition circuit, Ethan won the Grand Prize at the 2020 Phoenix Symphony Guild Young Musicians’ Competition (Senior Division) and, as a result, performed the first movement of Tchaikovsky’s Violin Concerto with the Phoenix Symphony.

There Ethan performed Waxman’s Carmen Fantasy with the Chandler Symphony. In 2016, he won First Prize at the Phoenix International Competition for Young Virtuosos. He has also placed in the American String Teachers’ Association of Arizona Solo Competition and the Music Teachers’ National Association Competition.

Rossini’s overture to his opera “An Italian Girl in Algiers,” also a crowd pleaser, completes the program. All three works on the program will use a reduced size orchestra, socially distanced on stage.

According to Kozacek, “We’ve been preparing for performing under best practice Covid protocols for some time now. We’re excited to finally be doing it.”

Pianist Kathryn Mientka-Farruggia is scheduled to return as soloist for the May 2 concert, performing the Clara Schumann Piano Concerto. Kathryn was previously featured in the Sinfonietta’s 2019 “Beethoven in the Movies” collaboration with the Sedona Film Festival, and in the Sinfonietta’s 2018 performance of DeFalla’s “Nights in the Gardens of Spain.”

Reduced price tickets for both concerts will be available on the Sinfonietta’s website, VVSinfonietta.org, starting on March 5.

Online ticket pricing remains $15 to $60, according to seating areas of the hall.

Masks will be required of all attendees.