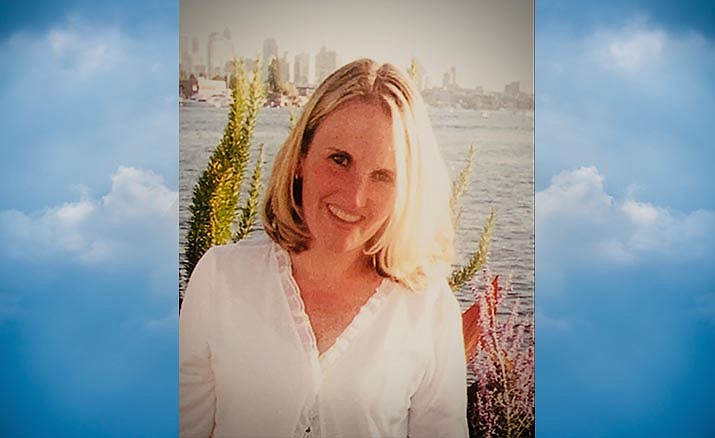 Catherine Janeen Murphy, née Elliott, age 46 of Clarkdale, Arizona, left this life on February 11, 2021. She was born to Patti Scholz Elliott and Danny Elliott in Phoenix, Arizona on May 16, 1974. Cathy grew up spending time between her family’s cattle ranch in Parks, Arizona and Cottonwood.

When asked once if she developed such a love of animals while growing up on the ranch, she laughed and said, ‘There are no pets on a cattle ranch, every animal had a job,’ and she didn’t get to have “pets” until she was older.

She became independent at a young age, and while working as a veterinary technician she finished her accounting degree. After the loss of her mother, Cathy pursued her true calling in healthcare, and became an award-winning, beloved nurse at Verde Valley Medical Center and later Yavapai Regional Medical Center in Prescott. It was through her work that she met her husband Seth, and they spent sixteen years together raising their family.

Cathy’s greatest role was as a mom to her four beautiful children, who were the center of their mother’s world. Together, Seth and Cathy worked tirelessly to ensure that their children were surrounded by love, opportunities, and fun.

In her twenty year career as a nurse in the ER, Labor and Delivery Unit and outpatient infusion, Cathy was well known for the kindness with which she treated both her colleagues and patients. She mentored countless nurses and students, and was always humble about her vast knowledge of the field and innate teaching ability. She believed that God was with her in the work that she did, and this showed in her gentleness and compassion toward others. This legacy lives on in her family, and in those of us who were touched by Cathy in our own lives.

Cathy is preceded in death by her parents, Patti Schulz and Danny Elliot; sister Donna Elliott, and brother Brian Johnson.

She is survived by her husband of sixteen years, Seth Murphy of Clarkdale; their four children, Thomas, Patrick, Rory and Collin Murphy; her sisters, Angie Keller of Prescott and Micheal Davidsen of Queen Creek, AZ; sisters-in-law, Sarah Dement of Jerome and Molly Whittaker of New Jersey; stepmother, Katie Lake of Florence, AZ, and mother-in-law, Truly Murphy of Cottonwood; as well as numerous nieces, nephews and dear friends. A Celebration of Life will be held at a later date.