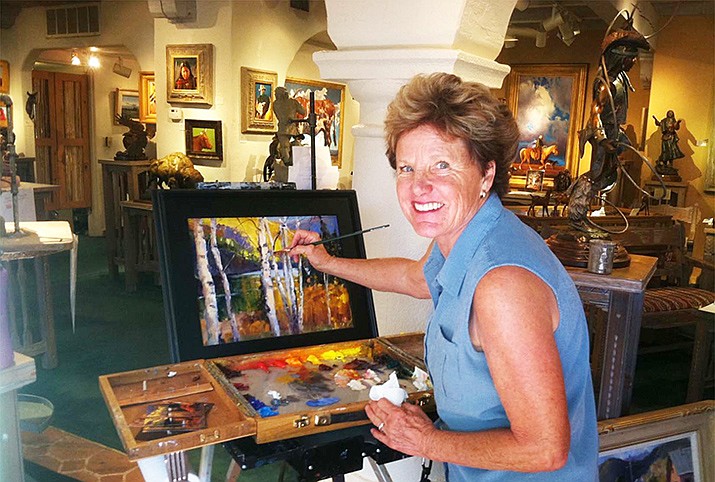 Betty Carr paints in Mountain Trails Gallery. In honor of Women’s History Month, the city of Sedona and its Arts and Culture Program are following the lead of the National Museum of Women in the Arts in Washington, D.C., to celebrate women artists for the second year in a row.

In honor of Women’s History Month, the city of Sedona and its Arts and Culture Program are following the lead of the National Museum of Women in the Arts in Washington, D.C., to celebrate women artists for the second year in a row.

The NMWA notes that most people have a difficult time calling to mind five female artists, but can recall five male artists with ease.

Because of this, since 2016, the museum has issued a challenge via social media throughout the month of March, called #5womenartists in which it invites art organizations to nominate five women artists to be celebrated that highlight gender imbalance in the art world nationally and internationally, increasing awareness of women in the arts. Organizations participating in this campaign include the Guggenheim Museum, the Museum of Modern Art and the Getty Museum.

“We are excited to once again highlight five of our magnificent Sedona women artists. Sedona is graced with a vast array of women with extraordinary creative vision. It is a pleasure to honor each one and their work,” said city of Sedona Arts and Culture Coordinator Nancy Lattanzi.

In 1993, Kliewer won a competition to create a monument of Sedona Schnebly for the city of Sedona. The ten-foot tall sculpture of the city’s namesake was installed in front of the Sedona Library in 1994.

Since then, many more of her monuments have been commissioned and installed in the U.S. and Europe. Her work is represented by Mountain Trails Gallery in Tlaquepaque.

Since 1980, Carr has devoted her life to painting. It is no surprise she is considered by many to be one of the foremost watercolorists of the Southwest. Her signature work embodies energetic, brightly colored watercolor still life, as well as landscapes in oil.

She is known for her skillful use of light, color and shadow in her floral paintings. She has been featured in numerous publications including Art of the West, Southwest Art, American Artist, Art Talk, American Artist and Vitality magazines, and was accepted to the Knickerbocker Association of New York City. Carr is also represented by Mountain Trails Gallery.

Hall’s rich sculptures and paintings are a reflection of her deep connection to the natural world and in particular the Southwest landscape and animals she loves.

Her paintings are full of depth, color and movement. Captivated by the red rocks of Sedona, Hall has spent years watching how the play of light across the rocks reveals a multifaceted dimensionality. As a result, her paintings mesmerize viewers.

Hall’s bronze donkey sculpture was awarded second place in the general membership for the Women Artists of the West show, at the Museum of Western Art in Kerville, Texas. Her work is represented by Goldenstein Gallery.

Wade has used her camera for decades as a way to capture and interpret the visual drama of the Southwestern landscape. She calls her work “the melody of light.”

Whether it is a sun-washed, snow-capped, thousand-foot butte backed by ominous black thunderclouds, or a feathery mist floating through a canyon, Wade feels compelled to share the sense of other worldliness she sees in the surrounding landscape. Her work is represented by the Village Gallery.

Colpitts, a ceramicist, channels joy into each piece she creates. Through touch, her hands “talk,” both taking in information and communicating back to the world via sculptures of animals.

Her work is a visual display of her love for the creatures of the world, powerfully capturing their essence.

As she sculpts, she deftly captures their personalities, actively working to create pieces that dynamically engage and bring joy to the viewer. Her work is represented by Kuivato Gallery.

Join the city in celebrating these Sedona women in the arts and for more information on city art programming, call Lattanzi at 928-203-5078, or email nlattanzi@sedonaaz.gov.