It's finally time to say 'Olé' to Molé' 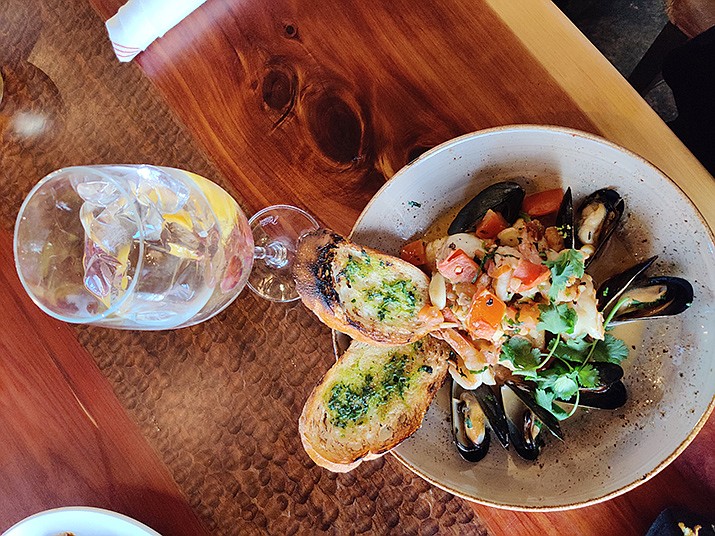 “Coming, September 2020, to The Arabella Sedona, Molé, Fine Cuisine of Mexico. With a modern interpretation, Molé is proud to present generations of authentic recipes, including homemade tortillas, salsas, and, of course, traditional molé made from scratch.”

Located on SR 179 N, where Elote Restaurant was before moving to Jordan Road, Molé is part of the Wild Thyme Group Restaurants led by well-known Sedona entrepreneur, Heinrich Stasiuk.

Jeff was especially excited for the new restaurant. He vows “no Mexican restaurant shall go untested”. We kept watching for signage to change from “Coming Soon” to “Open”

In November it did open, and we were some of the first guests. We had seen the menu online and had our hearts set on a duck entrée, only to learn from the corporate chef Jay, who was there, that with good reason, duck was not available that night.

It did not matter. We had much to choose from and it was all perfectly prepared that day, as advertised. We started with a ceviche appetizer. Not true. We started with margaritas. Then had the ceviche. For entrees Jeff had Lamb Adobo (Colorado lamb shank, ancho mole sauce, mint crema and queso fresco) and Suzie, Grilled Swordfish (“Line-Caught Pacific Swordfish”, Mole Verde and other garnishes).

Peach Sangria was a nice accompaniment, better than the “Rojo” according to Jeff. We finished with “perfecto” Prickly Pear Flan. The entire dinner was as good as any higher end Mexican restaurants in town and just a touch different to set itself apart.

We visited again with friends, Camilla and Jack Ross. The Rosses were enamored with the larger-than-life portrait of Frida Kahlo adorning the wall. “We love Frida, says Camilla.

It was a beautiful sunset evening and the shaded patio, with its great north-eastern views, could have been our choice to eat but we decided on inside. A good choice because later a large party was seated there.

Our foursome became a six-some when Larry and Fern Kane, friends of the Rosses, joined us. Don Seegell, Area Manager for the Wild Thyme Group and on the premise made it extremely easy for us to relocate to a larger high-top table.

Our same server, Blanca, came along with us. Camilla, at Blanca’s invitation, ordered the cornbread, made in, and delivered in a small cast iron skillet. Thumbs up, Camilla said. Her vegan request for no cheese was honored.

He consumed his charred jalapeno! Suzie went with the special of the night-Mariscos (sea bass, shrimp and mussels in a delicious fish broth and toasted garlic bread! Margaritas and Peach Sangria went with all.

Of interest to us was the information shared with us by Janeen Trevillyan, historian at the Sedona Heritage Museum. We were curious about a plaque on the west side of the building that houses Molé Restaurant.

It states that a Civilian Conservation Corp (CCC) camp exited on the location during the Great Depression. Janeen confirmed that up to 200 single men from distant locations were housed there between 1933 and 1939 and given prideful work.

The 311 Company of Sedona worked with the U.S. Forest Service to build the barn on Brewer Road, the original site of the Forest Service Station. The CCC performed other projects, particularly shoring up roadsides like those on Schnebly Hill.

Together with men from the next camp in Clarkdale, it built the pump house behind Creekside Plaza. The WPA projects were staffed by married men in their own hometowns to promote family togetherness. Thank you for relevant history, Janeen.

And thank you to the Molé staff and our old and new friends.

To Your Health and Happiness, Jeff and Suzie at The Dunnery

Halibut, Halibut, Haddock and Walleye
A grand time for all at Sedona Dine and Wine
Relaxed and enjoyable evening at Elote -- without reservation
Diving in to Dine in Sedona
Dine In/Dine Out with The Dunnery: Tortas de Fuego at last
Event Calendar