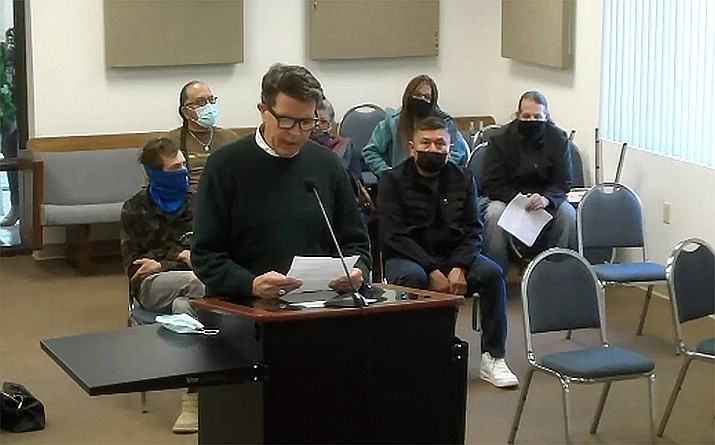 Mark Moorehead speaks in support of the Oak Creek Arts and Crafts Show at the Wednesday, March 17 Yavapai County Board of Supervisors meeting. The board voted 5-0 to approve a two-year extension of the show’s use permit. Courtesy of Yavapai County

YAVAPAI COUNTY — The Oak Creek Arts and Crafts Show will be able to keep using the location it’s had for years.

Micha and Marlo Johnson received a two-year extension on a use permit for their show, held in a shopping center on the northeast corner of State Route 179 and Jacks Canyon Road in the Village of Oak Creek.

The Yavapai County Board of Supervisors voted 5-0 to grant the extension. Supervisor Donna Michaels proposed a few new stipulations, with which Marlo Johnson agreed.

The permit allows for 15 shows per year.

Johnson also agreed to a list of conditions and stipulations set by the Yavapai County Planning and Zoning Commission at a February meeting. That commission recommended approval of a five-year extension with an 8-1 vote.

Michaels said she had some concerns about safety and traffic at the site. The parking lots and flow of vehicle and pedestrian traffic have changed since construction began on the Element hotel, located along the north part of the shopping area, about three years ago.

“We’ve been operating, without incident, there for three years since construction started on the hotel,” Johnson told the board.

An outlet mall was the main feature of the site when the Oak Creek Arts and Crafts show was first approved to use the location. Art shows have been approved at the location since 1992, according to Yavapai County Planner Leah Brock.

The approval process highlighted how local governments in Yavapai County continue to receive different types of feedback at various stages of a planning and zoning process. The show location was heavily opposed in a survey and at the planning commission meeting.

However, the email feedback to the Board of Supervisors, leading up to Wednesday’s meeting, was overwhelming in support of the show and of a permit renewal. The clerk for the board received four emails against the extension and 57 in support of it.

Those who signed up to speak at the meeting itself were mixed, in terms of support and opposition.

Jay Levinson is the brother of restauranteur Lisa Dahl, whose Butterfly Burger is in the shopping area used by the arts show. He said there is no one in the Dahl restaurant group he represents who is opposed to the show being held at the location. He spoke highly of the Johnsons' ability to control and manage traffic on the weekends the shows are held.

“Marlo is an amazing coordinator,” Levinson said. “Things might even be smoother on the weekends when they’re there.”

Johnson said she has gone over the parking and traffic flow plans for the shows with Sedona Fire District Chief Jon Davis.

Opponents of the plan who spoke to the board included Mary Morris, chair of the Big Park Regional Coordinating Council’s planning and zoning committee.

There are about 200 total parking spaces on-site for the show’s visitors, including a parking lot behind the hotel and shopping center. The Johnsons have an agreement with the Element hotel to share that parking.

Other residents also opposed the plan, due partly to how heavily used the recently reconfigured shopping area could become. Lenore Hemingway said three of the original five technical agencies that reviewed the original site plan, rejected it. There are still vehicles parking within the show area, she said.

“You cannot safely back a vehicle out of there,” she said.

Stephanie Brand, who said she is a former liability attorney, expressed concerns about jaywalking across State Route 179 as one of the reasons the board should reject the extension.

Supervisor Harry Oberg, whose district is not in the Verde Valley, said he made a recent trip to the village to see the site. He looked at other commercial sites along 179 and wondered if a lot configured like Bell Rock Plaza would be a better fit, though he later voted to approve the two-year permit extension.

Irene Black Rock, a member of the Navajo tribe, said the arts show is a great place for indigenous and other Arizona artists and crafters to sell their wares and earn a living. She points out that traffic and congestion are issues throughout the greater Sedona area, and not only on show weekends.

Several local artists pointed out the show’s economic benefit, not only to themselves, but also to Village of Oak Creek businesses.

Not all Village of Oak Creek residents who spoke were opposed to the plan.

“I am not an artist,” Mark Moorehead told the board. “I’ve lived here 12 years. I’m in favor of renewing the permit. I love bringing visiting friends and family to see local artists and things like goat soap and homemade honey. I have never seen a State Route 179 backup due to the show. Concerns have been raised about the possibility of future issues that the county has the authority to address and remedy them as they come up.”