Wanted man killed in shootout with deputies in Prescott Valley
Carefree man had been sought in Feb. 27 shooting incident in Uptown Sedona 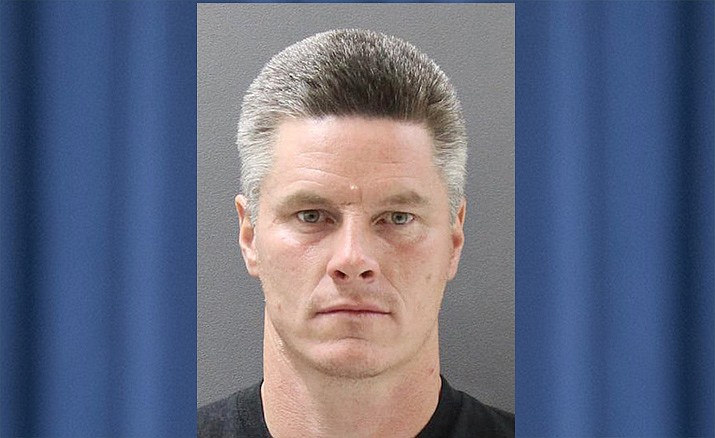 Edward L. Kayer, 42, of Carefree, was killed Monday night in a shootout in Prescott Valley with Yavapai County Sheriff’s deputies, according to a news release from YCSO. Kayer was wanted by the Sedona Police Department for a shooting incident that happened Feb. 27 in Uptown Sedona. Courtesy of YCSO

PRESCOTT VALLEY — A man wanted on gun charges for a recent Sedona incident was killed by police Monday night.

Edward L. Kayer, 42, of Carefree, was killed Monday night in an officer-involved shooting, according to a news release from the Yavapai County Sheriff’s Office. YCSO said Kayer fired multiple shots at deputies in a field off of Antelope Meadows Road and East Dog Ranch Road in Prescott Valley.

Kayer was wanted by the Sedona Police Department for a shooting incident that happened Feb. 27 in Uptown Sedona. According to YCSO, Kayer was suspected of firing more than a dozen rounds outside a restaurant after getting into an argument. At the time, he left the area before police arrived, YCSO said.

Monday, Sedona police received a tip that Kayer was in Prescott Valley and requested the assistance of the Prescott Valley Police Department in locating him. At about 2:15 p.m., Prescott Valley police located Kayer on a motorcycle and attempted to pull him over, YSCO said.

Kayer refused to stop and took off into the Legend Hills community. Prescott Valley police officers coordinated a search of the community and surrounding areas and found evidence he had dumped his motorcycle and took off on foot.

YCSO deputies were called and saturated the area in an effort to find Kayer. The Arizona Department of Public Safety’s Ranger helicopter was asked to provide air support during the search.

A Code Red emergency notification message was sent out to neighbors in the area letting them know an armed and dangerous suspect was in the area, along with Kayer’s description, the release states.

YCSO then received several calls from concerned citizens with tips on Kayer’s location.

Three deputies headed into the area to search the field at about 10:30 p.m. As deputies began their search, Kayer fired multiple shots at deputies, striking a patrol vehicle, YCSO said.

The deputies took cover. The DPS helicopter pilot located the suspect and shined a spotlight on him, allowing deputies to return fire.

Kayer was pronounced dead on scene, YCSO said. Kayer was convicted of manslaughter in Oregon and served 15 years in prison, the release states, and was wanted for a parole violation in connection to that case.

Kayer was also a “prohibited possessor” and was not allowed to possess a firearm.

Sheriff David Rhodes thanked the public for helping locate Kayer and pass along statements he made.

“We can’t thank the public enough for their help during the search for Kayer,” Rhodes said in the release. “Not only did we get numerous reports on his general location, but we also received information that Kayer made statements that he was armed and would fire at law enforcement if they approached, because he didn’t want to go back to prison. This was crucial information that our deputies needed and the outcome may have been different had we not known this.”

“The area that the shooting took place was in an open field,” Rhodes said. “It was extremely dark and our deputies were exposed, having to take cover immediately while trying to determine where the shots came from. Without the aerial support from the DPS Ranger that located the suspect and put a spotlight on Kayer, our deputies could have been seriously hurt or even killed. We are grateful for their help and so thankful our deputies weren’t injured by the suspect.”