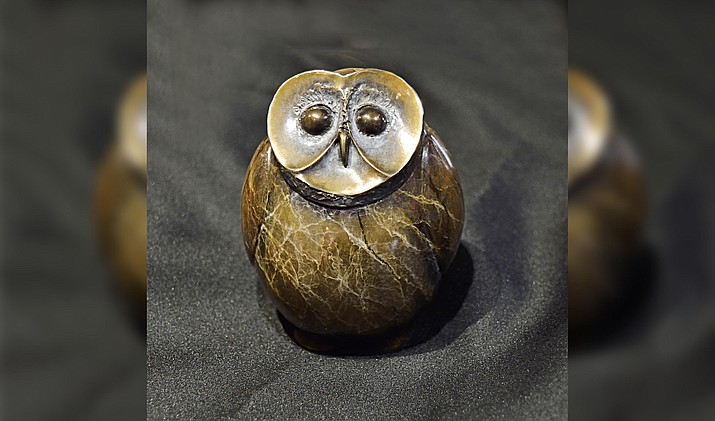 Fine art doesn’t have to be flat, and sculptures don’t have to perch on a pedestal or table.

In April, visit Rowe Fine Art Gallery where the artists are reimagining – and redefining – their mediums.

You may be surprised to find that some of these sculptures hang from walls a la paintings while others frequently find homes outdoors among the natural world’s flora and fauna.

During the show, new works from stone sculptor Alvin Marshall and bronze sculptors Erik Petersen and Ken Rowe along with mixed-media artist Shirley Eichten Albrecht will be on display.

Erik enchants art lovers with Spot, his depiction of a Mexican spotted owl, with its facial expression that manages to convey innocence and experience all at once.

“I wanted to sculpt another bird as a follow up to my Gambel’s quail piece, and the round form of the spotted owl seemed perfect,” says the Prescott-based artist. “And I wanted to feature a bird that can be found locally, although spotted owl sightings certainly aren’t common. I’ve also always been fascinated with the lives of owls, so it all fit together in one sculpture.”

Alvin says that, during the ceremony, the medicine man receives guidance from an eagle on how to heal his patient. “From the reflective look on his face, we know he is receiving the answer,” says Alvin.

Running Buffalo, also carved from Utah alabaster, features a Cheyenne-Arapaho figure in a headdress worn during the Calling of the Buffalo ceremony.

The third sculpture, Running in Free Air, was inspired by a fellow Native American artist.

“He rode his horses to Santa Fe to sell his paintings,” recalls Alvin. “He had two horses, one he rode, and the other carried his paintings. In his retelling to me, he says he and his horses came to a fence that was so wide across the land, they had to travel 20 miles out of their way to cross the fence. Thinking about my friend, I made this sculpture. There are no fences for this Native rider. He has the companionship of open land and his two beautiful horses.”

Award-winning bronze wildlife sculptor Ken Rowe will showcase his mountain lion bust, Canyon View, during the show. The bronze has been in the works for years, recalls Ken.

A photo that a friend captured of a mountain lion at Tucson’s Arizona-Sonora Desert Museum inspired the bust’s profile, while an encounter in the field roughed in the big cat’s features.

“Here was this mountain lion, quietly laying on a rock, but I could see his muscles bulging just a few feet from me,” remembers Ken. “It was like watching a bolt of lightning in slow motion.”

Meanwhile, mixed-media sculptor Shirley Eichten Albrecht recently revealed Curly Cue, which features her intricate basket weaving on a gourd painted a brilliant shade of turquoise. “When I started this piece, I knew I wanted to use a metallic gourd ink,” says Sedona’s “Basket Lady.” “That meant the gourd needed to be woven with something that would bring out the metallic finish. Wire was the answer. I took inspiration from my Bad Hair Day series and finished the piece with wire curls on top. That completed it perfectly.”

See these sculptures and more when you escape to Rowe Fine Art Gallery this spring.