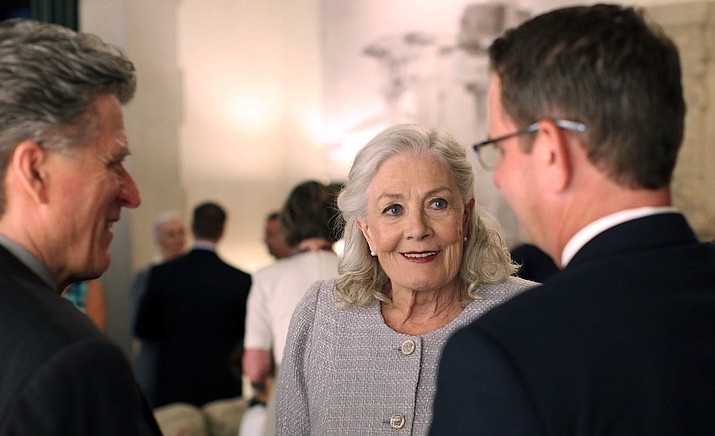 The Sedona International Film Festival is proud to present the Northern Arizona premiere of the acclaimed new drama “Georgetown” showing May 14-17 at the Mary D. Fisher Theatre.

Ulrich Mott, an eccentric social climber, seduces and marries a wealthy older widow, Elsa Brecht. Although Mott is three decades younger than his wife, they join forces to dominate the political and social circles of Washington, DC by throwing lavish events at their townhouse in the fashionable suburb of Georgetown.

In the world of political intrigue and gossip dominating the social scene in Washington, few couples stood out quite like Elsa Brecht (Redgrave) and her husband Ulrich Mott (Waltz).

At their luxurious townhouse in the fashionable suburb of Georgetown, guests found themselves in lively conversation with former world leaders and Supreme Court judges.

The more titillating conversations would focus on the hosts themselves – what was an 80-year-old woman with a rolodex of influential friends doing married to a man of dubious background nearly three decades her junior? For Elsa’s Federal judge daughter Amanda (Bening), it was incomprehensible.

Mott met Elsa shortly after the death of her first husband. Charming, intelligent, and eccentric he recounted stories of his life as a Count, a foreign spy, and most recently a General in the Iraq Army. To Amanda, he was a career con-man using her mother’s influence to build a business with the backing of Washington’s elite.

Inspired by true events, “Georgetown” tells the story of a highly unconventional love affair, of an outsider striving for acceptance and the desperate struggle for significance on every level, culminating in one of Washington’s most sensational scandals of recent times.

Tickets are $12, or $9 for Film Festival members. For tickets and more information, please call 928-282-1177. Both the theatre and film festival office are located at 2030 W. Hwy. 89A, in West Sedona. For more information, visit: edonaFilmFestival.org.