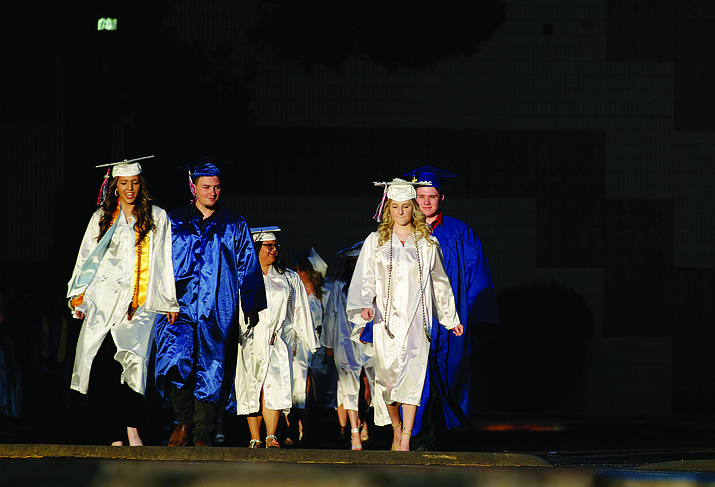 About 80 Camp Verde High School seniors will graduate on May 20 at the Sam Hammerstrom Football Field. Ceremony starts at 7 p.m. Courtesy photo

CAMP VERDE — A year ago, Camp Verde High School held traditional graduation, something Superintendent Danny Howe said recently he was “glad, and thankful” his district could offer its Class of 2020.

With Verde Valley’s school districts open to in-person learning, Camp Verde prepares for its Thursday, May 20 graduation on the Sam Hammerstrom Football Field. About 80 of the school’s seniors are expected to collect their diplomas in a ceremony that will begin at 7 p.m.

“People give me credit for the conviction, but I’m fortunate to be superintendent of a school district with the conviction, a school board that has the conviction,” Howe said. “The majority of the board felt it was important (to have graduation last year), and again in August to be open in person.”

Jane Mathews, one of the school’s counselors, said the district was “thrilled, thankful” to hold graduation a year ago.

“With all that was going on, it helped give some closure,” Mathews said. “But the kids missed out on so much.”

Although Verde Valley school districts started the school year in a virtual way, Camp Verde Unified opened its campuses on Aug. 17. Other than returning to full distance learning from Dec. 7 until Jan. 4, Camp Verde Unified was open to in-person learning much of the year.

“Most kids don’t do well with online learning,” Howe said. “The biggest impact was from kids in the seats.”

Yearbook adviser Tina Scott Purinton said recently that she’s “passionate and proud about how (Camp Verde Unified) conducted ourselves” with opening its campuses in mid-August.

“Our students continued to receive our best. Their educations haven’t waivered. We took their mental health seriously and stayed steady when our whole community needed that the most,” Purinton said. “Think about that. Without us being in person, the vast majority of our parents couldn’t go to work because even if there were daycares open, they can’t afford the extra expense. That in turn drastically affected our local small businesses. How could they keep their doors open when no one was available to man stations?

Recently, Camp Verde recognized graduating seniors who have received scholarships/awards. According to the school counselor’s office, 26 Camp Verde seniors were awarded roughly $1.4 million in scholarships, led by Ashlee Bueler, who was awarded $191,000.

Rayburn was awarded $73,500 in scholarships, which include the U of A, ASU Dean’s, Northern Arizona University President’s, Phoenix Cement and Verde Valley Rangers..