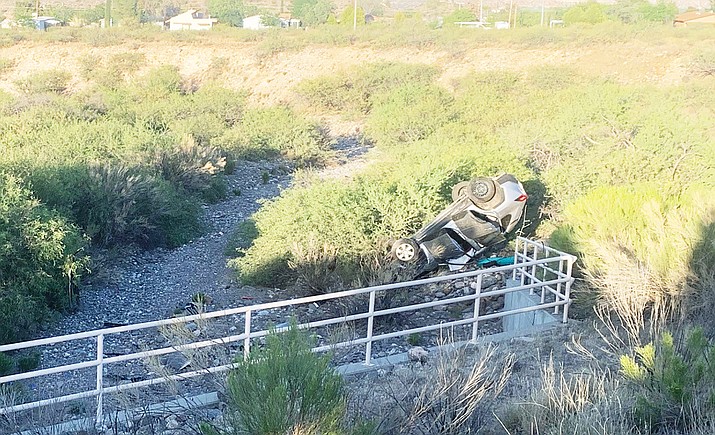 A single-vehicle rollover Sunday evening, near the Cement Plant Road and Clarkdale Parkway roundabout in Clarkdale, led to one person being flown to a hospital by helicopter. Courtesy of Verde Valley Fire District

CLARKDALE — A single-vehicle rollover Sunday evening led to one person being flown to a hospital by helicopter, according to a news release from the Verde Valley Fire District.

The rollover happened along State Route 89A, near Number 1 Foods, near the Cement Plant Road and Clarkdale Parkway roundabout in Clarkdale. The first engine company to get to the scene found a vehicle 150 feet off of the road and down in a ravine, on its top.

The driver was the only occupant and was ejected from the vehicle. That person sustained serious injuries.

Crews treated and stabilized the patient for transport to Flagstaff Medical Center by helicopter. The patient’s condition was not known as of noon Monday.

The Clarkdale Police Department is investigating the accident to determine the cause.