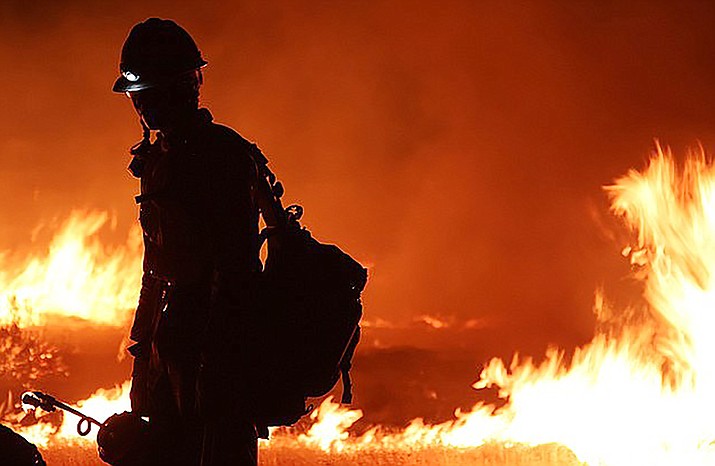 An Arizona wildland firefighter battles a blaze in 2020. Forecasts show the dry southwestern United States could be in for a rough wildfire season. File photo

VERDE VALLEY — Within the past 10 days, nearly every fire and forest agency in or close to the Verde Valley has imposed some type of fire restrictions.

Stage I Fire Restrictions within Copper Canyon Fire and Medical District include:

• No igniting, building, maintaining or using a fire with charcoal briquettes. The exceptions are one- and two-family dwellings or fixed-site restaurants or grills with tight-fitting lids in place.

A similar set of Stage I restrictions also went into effect across the Verde Valley and Northern Arizona last week. Stage I restrictions are in effect in all national forests in Arizona, as well as unincorporated Coconino and Yavapai county areas, the city of Cottonwood, Sedona Fire District and the National Park Service sites of Montezuma Castle, Montezuma Well and Tuzigoot national monuments.

Restrictions will remain in effect until fire and forest officials determine that conditions have changed sufficiently to reduce the risk of human-caused wildfire.

The City of Cottonwood’s restrictions include prohibition of fireworks. Cottonwood has a zero-tolerance policy toward the use of illegal fireworks.

Cooking, warming, or camp fires are still allowed at single and multi-family residential properties and city parks, where approved, but must be attended at all times.

As the fire danger continues to increase, Stage II restrictions might also be put into effect as the summer months arrive. In Cottonwood, that would mean no burn permits would be issued — residential or commercial — and welding, cutting and grinding are prohibited.

According to the National Centers for Environmental Information, Arizona, New Mexico, Nevada, and Utah had their driest March-April period in 126 years. A map of the southwest shows a dark red danger area over all of Arizona and New Mexico for May and June.

The National Interagency Fire Center released a summary that encourages Arizonans to hold out for monsoon season, which didn’t bring much rain to the state in 2020.

“The Southwest is forecast to have above-normal significant fire potential through June, before the monsoon arrives,” the agency said in a report.

“Snowpack is also well below average across the southwest, Utah, California, and portions of Nevada and Colorado, with large expanses of severe to exceptional drought across these areas.”