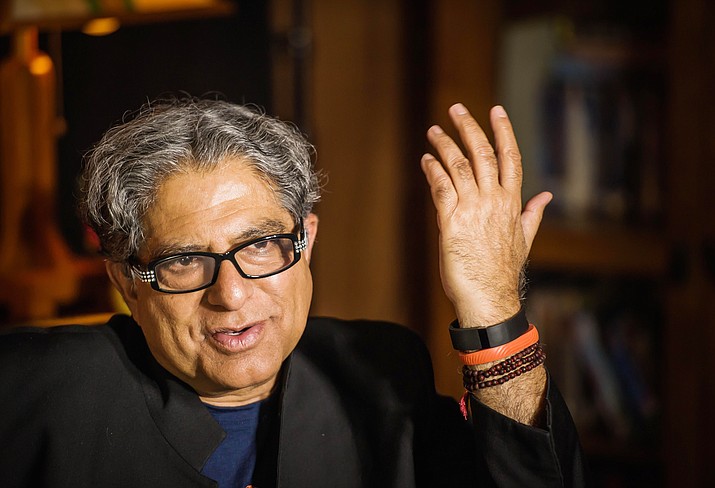 Deepak Chopra will receive the festival’s fifth annual Conscious Visionary Award Tuesday, May 25, following the world premiere screening of The Way of Miracles at the Mary D. Fisher Theatre.

ILLUMINATE Film Festival, the nation’s premier conscious film festival, returns in both a virtual and in-person format with a stellar line up of films, premieres, panels, parties and special events for its sixth annual showcase May 20-26 in Sedona.

“The festival is designed to help audiences find their true path to well-being,” says festival founder and Executive Director Danette Wolpert. “And with the year we all just had, we feel these films — and the festival — are needed more than ever.”

ILLUMINATE begins Wednesday, May 19, with a free open air kickoff screening of We Are The Thousand, a rousing film about the power of music that follows a group of musicians willing to go the mile to get their favorite band to play in their small town.

Deepak Chopra will receive the festival’s fifth annual Conscious Visionary Award Tuesday, May 25, following the world premiere screening of The Way of Miracles at the Mary D. Fisher Theatre. Chopra’s prolific work over the last few decades in mind-body medicine, highlighted over decades in dozens of documentaries, has paved the way for the return of ancient wisdom and practices into our modern lives and for countless people to move from disease to health.

Following the May 25 showing of the touching drama-love story Grace and Grit, a narrative film based on the life of iconic philosopher and “Einstein of Consciousness” Ken Wilber, MDF audiences will revel in an unforgettable Luminary Living Room Conversation with Ken Wilber, Deepak Chopra, Marianne Williamson and filmmaker Sebastian Siegel.

New this year is the festival’s pop-up drive-In, located at the Sedona Airport, playing audience favorites May 21-23 such as Mucho Mucho Amor, a Sundance selection about the inimitable, legendary astrologer and psychic Walter Mercado, and Dreamer, an inspiring ode to living one’s dreams no matter the obstacles.

On May 22, attendees are invited to stay after the drive-in screening of the joyous Playing for Keeps for a “LET LOOSE” Drive-In Dance Party in the open air. Attendees are encouraged to bring their glow sticks, hula hoops, roller skates and dancing shoes, and let loose.

Area restaurants are inviting festival-goers to meet up for evening fun, food and drink. Select restaurants will offer ILLUMINATE specials on specified evenings throughout the week.

The opening film is AWARE: Glimpses of Consciousness, a North American premiere that follows six gifted researchers as they explore the mystery of consciousness.

The centerpiece screening will feature the world premiere of The Seeds of Vandana Shiva, which tells the remarkable life story of eco-activist and agro-ecologist, Vandana Shiva, who rose from obscurity to become the most articulate voice for organic food systems.

Renowned author of The Power of Eight and ILLUMINATE’s 2021 Humanitarian Award recipient Lynne McTaggart offers a free historic event on May 21st at 10am MST to help end polarization in America.

At ILLUMINATE’s 2021 Conscious Film Convergence, a two-day program of educational panels and spotlight conversations for film industry professionals and aspirants, registrants will delve into live conversations with conscious media trailblazers such as:

Nine documentary films are slated to make their world debuts at the 2021 ILLUMINATE Film Festival. “It’s a testament to the universal quest for connection, and why we created the festival as a home and launching platform for conscious films,” said Danette Wolpert. “We’re honored that a growing number of films choose to show here before anywhere else.”

World premieres have more than doubled since the festival’s inaugural installment in 2014. Part of a world-class film line-up, the nine world premiers join a festival gaining increasing recognition not only for the quality and intent of its films, but also as a “destination festival” and conscious experience in itself. ILLUMINATE was selected by The Huffington Post as a “top festival to revitalize the soul.”

ILLUMINATE 2021 takes place May 20-26 online and in Sedona, Arizona at the Mary D. Fisher Theater, the Sedona Airport Drive-In, and The Collective Sedona. The festival is dedicated to ensuring our audiences feel safe and will therefore comply with recommended CDC guidelines, including socially distanced seating, air and surface sanitizing and mask-wearing where appropriate. Safety protocols can be viewed on the website.