Light up your dining experience at Strada in Old Town Cottonwood 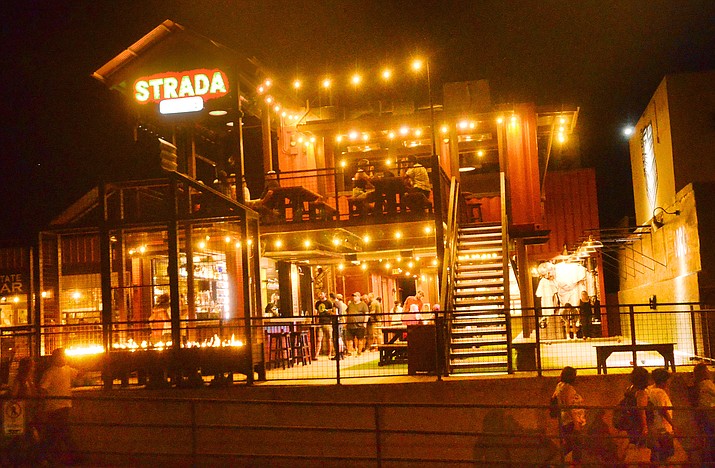 Eric and Michelle Jurisin’s new Strada at Bocce lit up the end of Old Town on Saturday night. VVN/Vyto Starinskas

If you’ve run out of unique dining experiences to try in Cottonwood, you might want to head down to the heart of Old Town to Eric and Michelle Jurisin’s latest culinary experiment – the Strada at Bocce.

You can’t miss it. It’s lit up like a big glowing candle.

Flames and a reddish glow illuminate the steel structure as it welcomes groups of curious people who enter the newest addition to Old Town.

Strada at Bocce is an extension of the popular Pizzaria Bocce Restaurant.

“This is a bigger and better Bocce,” explained Jurisin.

There is no regular seating in the Strada like there is in the adjacent Bocce Restaurant. Customers order their food at a window and sit where they want.

Seating can mean along a row of flaming torches or up in a second-level boxcar, which makes customers feel like they are in a “treehouse,” explained Jurisin.

“The difference (from Bocce) is it’s Neapolitan street food,” explained Jurisin, who was greeting guests at the front door Saturday night. ”It gives another place to hang out at Bocce, but it’s almost a food truck mentality.”

There are “street foods” and appetizers on the menu, but even the pizza is done differently from Bocce, he said.

The Strada has its own oven that was brought over from Italy, Jurisin said. It has its own bar for cocktails.

“Bring the kids for ice cream, bring grandma,” he said. They make their own Gelato there.

The Strada menu offers seven pizzas including Pizza Montanara, “from the mountains of Naples,” and others called the Margherita, Salsiccia and Fungi and the White Clam.

Appetizers include everything from antipasti, artichoke and spinach bruschetta, truffle fries, caprese skewers, arancini, butcher board and, of course Bocce balls, which are chicken and sausage meatballs topped with bocce-hand stretch mozzarella.

“It’s a good place to hang,” Jurisin said. There’s a great view of the Cottonwood trees while sitting on the second level.

There is a hope and vision that the Strada will fit into the Old Town area known as the Old Town Square, which is surrounded by a winery, a beer bar, and several other businesses.

Jurisin said there has been talk about live music and maybe even a small farmers market in the square.

The restaurant owner said he has hired about 10 employees for the Strada and said staffing has been difficult.

“Staffing in the Verde Valley is in crisis-level in my opinion,” Jurisin said. He said the workforce shortage started with the popularity of vacation-home rentals. He said the lack of affordable housing has made it difficult to staff any of his restaurants.

Jurisin and his wife, Michelle, own the Haunted Group of restaurants in the Verde Valley, which includes the Haunted Hamburger and Grapes Restaurant and Bar and Pizzeria in Jerome; Pizzeria Bocce, Nic’s Italian Steak & Crab House, the Tavern Grille, the Crema Craft Kitchen + Bar and the newly opened Clinkscale Restaurant in Jerome.

The Strada makes the Bocce bigger and better, Jurisin explained. “What we now offer is self-service, or full-dining. You have your choice now.”

The Strada at Bocce is located at 1060 N Main St, Cottonwood.