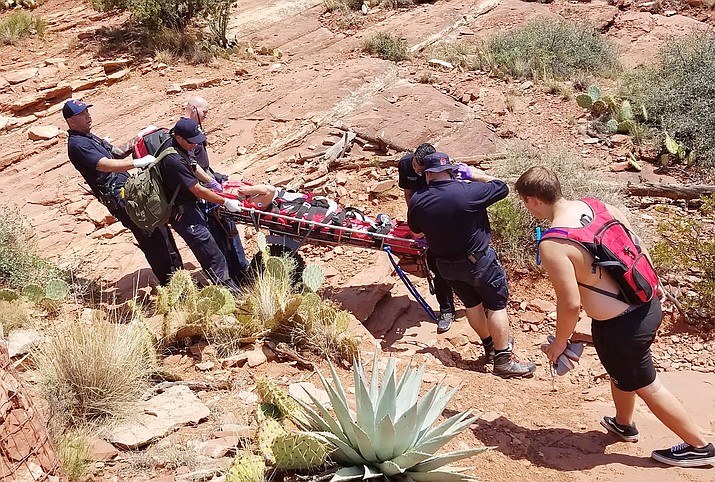 Sedona Fire District staff treated Amanda Rumore here when she fell near at a vortex near Enchantment Resort in July 2018. Her recovery story is one of 25 included in the newly released book “Legacy Speaks: Powerhouse Women Leading Lives Worth Remembering.” Courtesy photo

Amanda Rumore says she has no memory of the weeks that followed July 30, 2018.

However, the Scottsdale resident has been able to not only reconstruct some of her memories in indirect ways — and she has a different outlook on life after a 40-foot fall in Sedona that nearly killed her.

Bridget Aileen Sicsko coordinated the stories of 25 women, asking themselves important life questions and exploring their traumas, healing, joy and how they want to shape their legacies. Rumore’s story chronicles her July 30, 2018 fall near Enchantment Resort at a vortex she was visiting with her family. 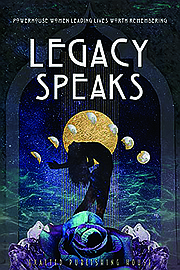 "Legacy Speaks" is available on Amazon.

“I’ve learned so much more about how to live in today,” Rumore told Kudos. “And I’ve learned about how God is beautiful, and how we treat each other really matters.”

After attending Catholic school growing up in the Chicago suburbs in a “big Italian family,” Rumore first came to the Grand Canyon State to attend Arizona State University. Her career as a publicist took her to Hollywood and eventually to Scottsdale, where she married her husband, Anthony, and began raising their only daughter, Mia Valentina.

Like many visitors, Rumore was drawn to the Sedona area because of the vortices. It was on a July 2018 stay at Enchantment Resort, which she planned to review, that her fall occurred.

Rumore fell at a spot near the Kachina Woman rock formation and the vortex in Boynton Canyon.

“I lost my footing and fell 40 feet down, with my head wedged in between two boulders,” she said.

Anthony, her husband, relied on his U.S. Army training in first aid to keep her alive until Sedona Fire District responders could reach her, she said.

After Anthony implored the responders to evacuate Amanda by helicopter, she was flown to a hospital with many injuries, and, by Anthony’s recounting, little chance at surviving.

“I was in the hospital for about a month,” she said. “I had a traumatic brain injury, a broken arm and cracked vertebrae. I couldn’t walk.”

Rumore said she didn’t wake up for days, and she finally moved her body when Anthony played music from her favorite artist — Stevie Nicks. In the times when she was awake, after that, she often verbalized that she was age 15 years and living in Illinois.

“I still don’t remember the first, like, three weeks after the fall,” she said.

After returning home, Rumore completed a series of therapies, including physical, occupational, speech and psychiatric. While her body recovered, the adjustments in her mind and self-image weren’t easy.

“I felt really isolated, confused and afraid,” Rumore said. “But I was determined to be a mom to Mia.”

Rumore began volunteering in her daughter’s preschool class and at church. She slowly began understanding the books she could read.

After writing for a local magazine and as a content manager for Tony Robbins and Dean Graziosi Mastermind, Rumore became head of publicity at a national communications firm that focuses on clients “who are making the world a better place.”

Rumore said initially, she had no intention of ever returning to Sedona. However, she said, she’s begun to be more open-minded to visiting Sedona again — under the right circumstances.

She said she almost instantly became aware that there isn’t much discussion in media about falls, the injuries that come from falls and prevention.

“There isn’t much of this in the mainstream,” Rumore said. “I used to hike Camelback Mountain by myself. Now, I know, a hike should involve at least one buddy, and a third person should know when you’re going and about when you should return. This isn’t talked about enough — have a plan.”

Being raised Catholic, the spiritual lessons of Rumore’s experience are readily apparent to her.

“There isn’t really right and wrong; everything is nuanced,” she said. “I’ve learned how to live for now.”