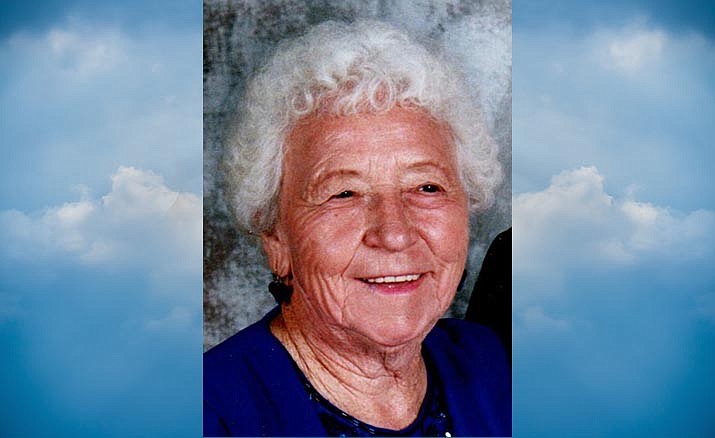 Della Mae York Killebrew Womack, 97, died peacefully May 14, 2021 at her home in Rimrock, surrounded by family. She was born April 8, 1924 to Dave and Nell York in Camp Verde, Arizona.

She was nicknamed “Dolly” by her older brother, Gene in early childhood, and she went by that name all her life.

In February 1939 she married Ernest Killebrew. They had three children. Their oldest, Robert Wiley Killebrew, died in 1959 in a car accident. Son, Howard Eugene Killebrew of Lander, Wyoming passed away in 2018.

She is survived by her daughter, Joyce Killebrew Barnett of Cornville, Arizona. In Dec. 1966, Dolly married James Womack, Sr. Dolly and Jim lived many years in Arizona and spent summers in Lander, Wyoming. James died in May 2002. During their 36-year marriage she embraced Jim’s four children as her own. They are David Womack, James Womack, Jr. and Linda Slater of Rimrock and Dennis Womack of Roosevelt, Arizona.

She is also survived by sisters, June Meacham of Camp Verde and Myrtle Ann Taylor of Fullerton, California. She had numerous grand-children, great-grandchildren and great-great-grandchildren. Dolly had a remarkable pioneer spirit.

She and Jim were frequent hunters and loved fishing. She helped her son Howard in his outfitter guide service in Wyoming and she irrigated large pastures for the Killebrew Ranch in the Lander, Wyoming area. She loved her large garden and canned much of her produce for her family.

During hunting season Dolly took the lead when it came time to cut and wrap the game meat. She always helped all the families when there was butchering to do. On family campouts her Dutch ovens turned out mountains of biscuits, main courses and desserts.

Dolly designed, built and/or remodeled over 20 homes in the Verde Valley, and remodeled the cabin she and Jim lived in outside of Lander, Wyoming. Dolly lived an incredible and varied life.

She could milk the cow and churn the butter, tend all kinds of livestock, wrangle and ride the horses, mix cement and lay a rock wall, build and then keep her house and cook the meals. And when all that and more was done, she enjoyed being a lady and dressed up for a formal occasion when it was called for.

In her late 70’s she took up sculpting and won Grand Prize at the Verde Valley Fair for a sandhill crane she sculpted.

She loved to travel and explored much of the world – Belize, Australia and New Zealand, Italy, Alaska, Hawaii and across the U.S. from coast to coast. She joined her sister and brother on cruises many times.