Snakes alive: Verde Valley has lots of rattlers this spring 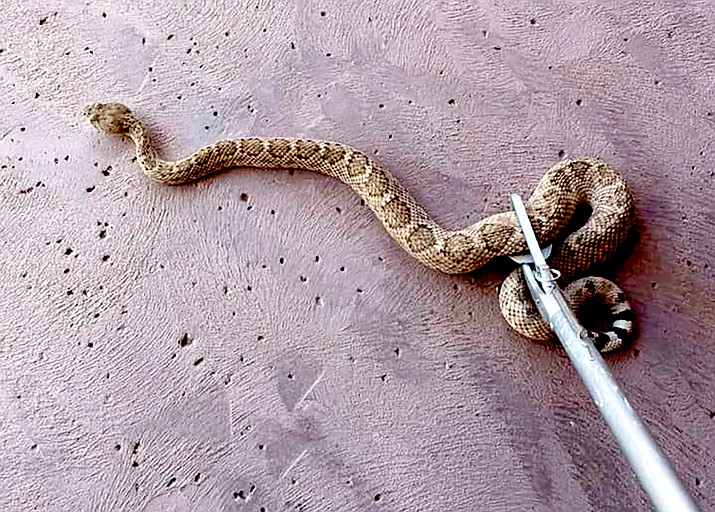 COTTONWOOD - A three-foot rattlesnake crawled across the backyard of Scott and Heather Parris’ property in Verde Village last week.

Scott, who is very experienced at handling reptiles, grabbed his snake thong and easily caught it.

He put the rattlesnake in a secure aquarium and drove it away. “I relocated to (the) forest away from any homes,” he said.

The Western Diamondback was very calm and healthy. It is the fourth rattlesnake he has found on his property in 13 years.

“They have lived here much longer than humans so as I am the intruder, I respect their absolute right to live,” he said.

Parris said he does not recommend self-removal unless a person is extremely experienced with snakes.

“I’m very knowledgeable about reptiles,” he said “A bite is very serious and silly expensive.”

The Arizona Game & Fish Department reported there were 264 snake bites recorded statewide in 2020.

The Sedona Fire Department removed a rattlesnake during a rescue call in Oak Creek Canyon March 8.

“Please remember, as outdoor temperatures continue to rise and activities follow, you may encounter unexpected visitors,” explained the SFD’s Facebook post that featured a photo of a fireman with a live rattlesnake dangling from a snake thong.

“Rattlesnakes are out, moving around, so please remain mindful and avoid if possible,” said the fire department.

Another woman encountered a chubby Western rattlesnake while on trails along Wikiup Mesa near Rimrock.

The photo on Facebook Monday showed the snake crawling in a tire track and blending in with the dirt. Several people commented on the post and added their own tales of recent rattlesnake encounters in the Verde Valley.

Tom Bagley, long-time Verde Valley Arizona Game & Fish Department wildlife manager, had a Western Diamondback on his front door mat a few weeks ago. He moved it to a nearby wash.

This time of year rattlesnake observations are pretty common in the Verde Valley, Bagley said.

“The drought that we are experiencing can cause rattlesnakes (and other wildlife) to concentrate around residential neighborhoods and water sources,” he pointed out.

Montezuma Castle National Park employees find and tag about 18 to 20 rattlesnakes each year. The snakes are matched to a data base kept by NAU researcher Erika Nowak since 1995.

A trained NPS volunteer takes data on the snake – weight, length, age, the number of black bands on the rattle, look at its overall health before microchipping the reptile. A colored pen marks the rattle with a unique pattern and the rattlesnake is released back into the park area.

Rattlesnakes are also captured and released at the Tuzigoot National Park in Clarkdale each year. Tuzigoot has a high density of recorded Western Diamondbacks. The park has about 20 to 25 rattlesnakes per year that are caught and released.

Dead Horse Ranch State Park in Cottonwood dubbed May 20 as “Rattlesnake Day” at the park.

“The snakes are out and about, so please be mindful anywhere you are in the park, this is their home too,” explained the state park Facebook post.

“Stay on the trails, and keep pets on a leash. If you do come across one, be respectful and keep your distance, don’t try to move it, and report your sighting to a ranger.”

Red Rock State Park found a black-tailed rattlesnake in an unusual location sunning itself two weeks ago at the park.

The yellow and black rattler blended-in perfectly across the double-yellow line of the park’s main road as it caught some rays.