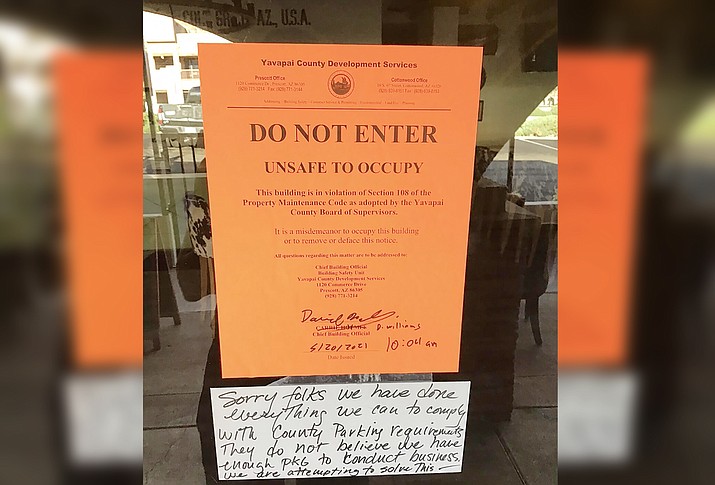 A Yavapai County “unsafe to occupy” notice, dated May 20, adorned the locked doors of Colt Grill’s newest location, at 6101 N. State Route 179, Suite D, in the Village of Oak Creek. A handwritten note below the notice refers to a parking-space requirement dispute between the restaurant owner and the county. Courtesy photo

Below the notice, as of May 21, was a handwritten note that read: “Sorry, folks. We have done everything we can to comply with county parking requirements. They do not believe we have enough parking to conduct business. We are attempting to solve this.”

Williams, reached by phone, said he “cannot comment on any pending investigations.”

Owner Brenda Clouston said the issue the county has with her business is over five parking spaces.

“I was given a directive from the county on how best to obtain additional spaces,” Clouston said “After several weeks and much back and forth, I was able to achieve what they asked for, and sent it to them believing that was the last and final hurdle. Apparently, it wasn’t, as my building was deemed ‘unsafe and unfit to occupy.’”

Clouston said her team is “working on solutions.”

Clouston has been working on getting the VOC open since August of 2019. Colt Grill’s application for a planned area development major modification got a 5-3 recommendation of approval in September 2019 from the Yavapai County Planning and Zoning.

There was significant opposition and support for the application and a 2.5-hour discussion that focused heavily on available parking. The commission’s narrow approval included a stipulation to have a maximum of 1,090 square feet of patio and 49 parking spaces.

When the Yavapai County Board of Supervisors unanimously granted final approval of the modification request a month later, parking was again discussed. However, the board did not make any major recommendations or add any stipulations.

Clouston said she and her staff are thankful for the outpouring of support they’ve received from the community.

“As a team, we pushed through the pandemic and all the shutdowns and ups and downs of that, and because of a great staff and pure determination, we made it through,” Clouston said. “And now to have to now deal with this, well, it’s disappointing, but we will push through this, too. We are all hopeful that we can get them back to work and happily serving our fantastic barbecue soon. We miss the customers and seeing them so happy.”

Yavapai Supervisor Donna Michaels represents District 3, which includes the Village of Oak Creek. She sent out a statement late Tuesday morning after the Verde Independent posed several questions about her involvement with Clouston's efforts to get compliant with the zoning stipulation. She said she has spent some time gathering facts and would like to clear up some important misconceptions.

Most prominently, Michaels said Clouston chose to open the VOC Colt Grill location without a valid Certificate of Occupancy -- a clear violation in many jurisdictions.

"According to Development Services’ timeline of events, the owners of Colt Grill were told multiple times they could not open with this Certificate of Occupancy," Michaels wrote. "The restaurant defied this order and opened to the public regardless. This was an alleged violation of the venue’s food license, local fire codes and their liquor license."

Michaels said when Development Services visited the property last week, the front gate of the business was chained closed – essentially locking employees in and locking other people out – while workers were actively cooking and operating an outdoor meat smoker.

"While we may not agree with the law or things like permitting processes, I believe none of us is above the law," Michaels wrote. "We can’t simply disobey laws that inconvenience us or that we don’t like."

Michaels said the core of the conflict is a problem concerning the number of parking spaces on the property. Colt Grill agreed to provide 49 spaces, but ultimately provided only 38 – which flies in the face of the plans submitted to the county and ownership’s assurances that the plans were accurate and they would abide by the 49-space minimum.

Michaels pointed out the decision to shut down the location last week was not made by the Board of Supervisors. She said Williams consulted with the County Attorney’s Office, Health Department and the Sedona Fire District before making his decision.

"We did not play a role in the decision-making leading up to the issuance of the 'unsafe to occupy order,'" Michaels wrote. "Nor can any supervisor simply overrule Development Services."