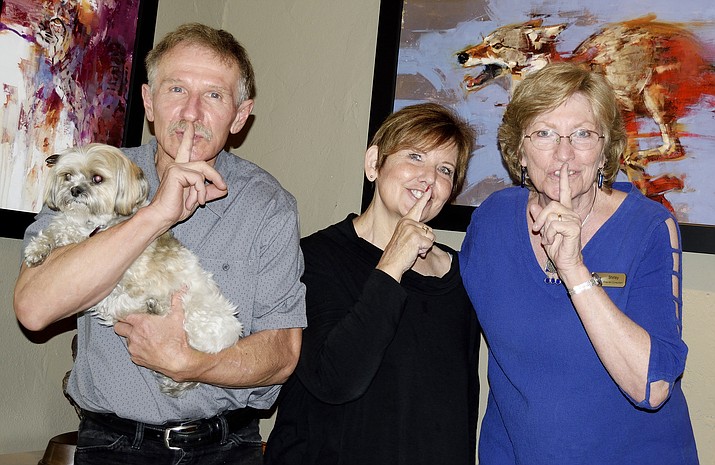 Do you want to know a secret? Rowe Fine Art Gallery does. The Tlaquepaque gallery recently asked its family of artists to divulge one thing most people don’t know about them, and the answers prompted laughter and conversation.

• Shirley Eichten Albrecht, sculptor – I was the head chef at a large resort along the boundary waters in Northern Minnesota for two-and-a-half summers. Coming from a family of 16, I knew a thing or two about making big meals!

• Julie T. Chapman, painter – I currently train and compete in dog agility, and my 6.5-year-old German shepherd is one of the top five agility shepherds in the United States.

• Kim Diment, painter – I played on a women’s pool league for four years.

• Jen Farnsworth, painter – I am a “plane spotter.” There are thousands of aviation enthusiasts from all over the world who film, photograph and document aviation activity. I have actually started a documentary about all the wonderful and quirky people known as “the spotters.”

• Lynn Heil, painter – In Texas, I once worked for my Uncle Paul, who had a business retrieving small private airplanes from crash sites. Since then, I have never flown in a single-engine airplane or helicopter.

• Liam Herbert, sculptor and jeweler – I slow danced with Elizabeth Taylor on two occasions, once at a surprise birthday party for Maureen Stapleton and again at a private party at Halston’s Fifth Avenue showroom.

• Jennifer Inge, jeweler – I love to dance and ride my horse at night when there’s a full moon.

• Kim Kori, sculptor – At age 18, when my father informed me that he couldn’t afford to send me to college, I became a flower child and hitchhiked from Pennsylvania to California.

• Alvin Marshall, sculptor – When I was at a boy’s dormitory, I used to be in the honor dorm and was respected by all the faculty. I was very active in sports. I was a boxer from the age of 15 to 17.

• Erik Petersen, sculptor – I write songs and have performed my own original music live many times.

• Joel Petersen, sculptor – I have nine sisters and seven brothers.

• John Rasberry, painter – When I was a freshman in high school, I traded a pencil drawing to my big brother for his electric guitar. He needed a birthday present for his girlfriend, and I wanted his guitar. I taught myself to play and went to college on a scholarship to play for the Howard Payne University touring stage band and jazz ensemble. I still play the guitar, but my brother and his girlfriend broke up, so I would say I got the better deal.

• Ken Rowe, sculptor – My dirty little secret is I like dirt…riding on it with my mountain bike, that is. World-class mountain biking is a big part of Sedona. It would be a shame to not take advantage of our trails or scenery.

• Joshua Tobey, sculptor – While I was in college, I guided fly-fishing trips and worked nights as a janitor at a public school in Crested Butte, Colorado.

Did you learn something new about your favorite painter, sculptor or jeweler? Come see his or her most recent work this summer – you just might look at it a little differently now.

Rowe Fine Art Gallery represents traditional and contemporary southwestern artists. The gallery, located under the bell tower in Patio de las Campanas at Tlaquepaque Arts & Shopping Village, is open Monday through Thursday, 10 a.m. to 5 p.m., and Friday through Sunday, 10 a.m. to 6 p.m. For more information, call 928-282-8877, visit rowegallery.com, or find us on Facebook, Instagram and Twitter.