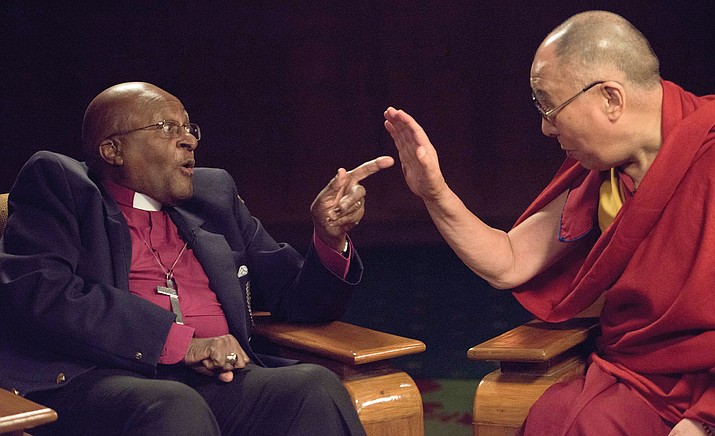 The Sedona International Film Festival has partnered with SedonaKind to present the encore of the multiple award-winning film “Mission: Joy — Finding Happiness in Troubled Times” on Sunday, Nov. 14, as part of the Sedona Kindness Day celebration, according to a news release.

There will be two shows at 1 and 4 p.m. at the Mary D. Fisher Theatre. The ticket price is a donation of $10 with proceeds to benefit the charity work and projects of SedonaKind.

“Mission: Joy” has won acclaim and awards at prestigious film festivals around the world and was the closing night film at the recent Sedona International Film Festival. The film — and its powerful message — return to Sedona for this special encore by popular demand as the fitting observation of Sedona Kindness Day.

In their final joint mission, these self-described mischievous brothers give a master class in how to create joy in a world that was never easy for them. They offer neuroscience-backed wisdom to help each of us live with more joy, despite circumstances.

Inspired by New York Times bestseller “The Book of Joy: Lasting Happiness in a Changing World”, the film showcases the exchange between these two Nobel Peace Prize winners that led to that book.

Consisting largely of never-before-seen footage shot over five days at the Dalai Lama’s residence in Dharamsala, the film invites viewers to join these luminaries behind the scenes as they recount stories from their lives, each having lived through periods of incredible difficulty and strife.

With genuine affection, mutual respect and a healthy dose of teasing, these unlikely friends impart lessons gleaned from lived experience, ancient traditions, and the latest cutting-edge science regarding how to live with joy in the face of all of life’s challenges from the extraordinary to the mundane. “MISSION: JOY” is an antidote for the times.

“Mission: Joy — Finding Happiness in Troubled Times” will show at the Mary D. Fisher Theatre on Sunday, Nov. 14, at 1 and 4 p.m. Tickets are a donation of $10. All funds raised from the two showings and any donations received will benefit the charity work and projects of SedonaKind.

Again this year, SedonaKind has an anonymous donor who will be matching all additional donations received that evening.