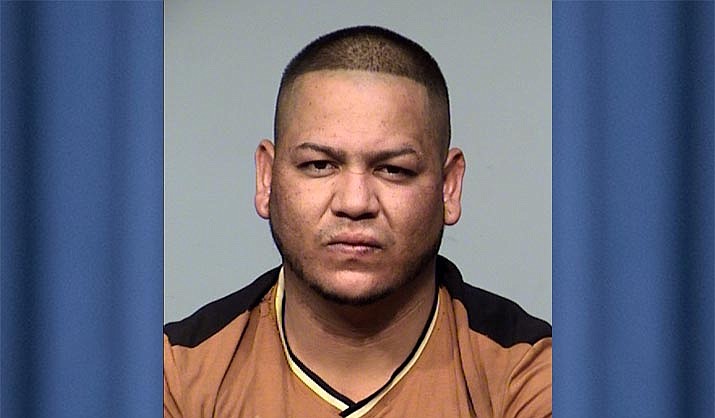 COTTONWOOD — A 27-year-old Cottonwood man was arrested on multiple charges after he allegedly attempted to intentionally collide with another vehicle on the road and later punched a police officer while resisting arrest, according to a news release.

Cottonwood Police Department officers took a report Sunday, Nov. 7, from a person being pursued by an erratic driver on Main Street who “intentionally tried to collide” with his vehicle.

Sinn said that when Cottonwood PD officers contacted the driver in the parking lot, he was the lone occupant in the vehicle.

“During this contact officers observed an open alcohol container in the vehicle,” Sinn said.

The driver, 27-year-old Raul Omar Esquer-Rodriguez of Cottonwood, was instructed by officers to exit the vehicle.

“He refused,” Sinn said in a statement, adding that one of the responding officers attempted to open the car door, but Esquer-Rodriguez pulled it shut.

“Officers attempted to remove Raul from the vehicle and he began fighting with officers, punching one officer in the face,” Sinn said in a statement.

At one point, an officer deployed his Taser in an attempt to subdue Esquer-Rodriguez so that officers could arrest him without causing further injury to himself, or other officers, but the suspect was able to remove the Taser probes and continue fighting.

“After a few moments officers were able to gain control of Raul and affected the arrest without further incident,” Sinn said.

During a search of the vehicle, Cottonwood PD located a usable amount of methamphetamine, cocaine and a large hunting knife.