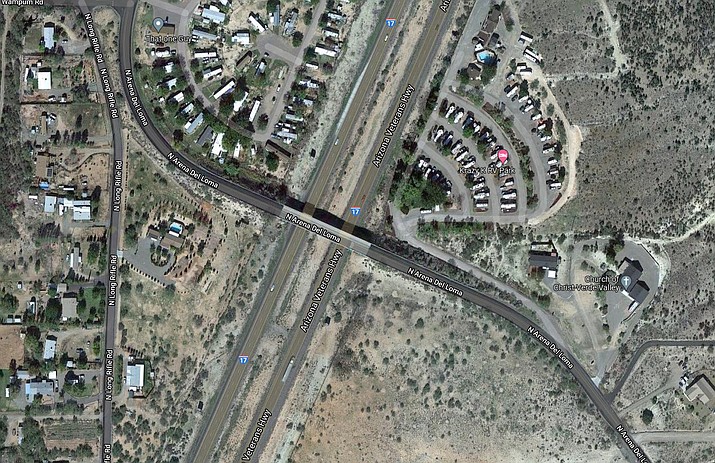 This map shows the location of the Arena Del Loma overpass on Interstate-17 where a 16-year-old male was found deceased late Tuesday, Nov. 16, 2021. Police continue to investigate and have not released the cause of death. (Google Maps screenshot)

CAMP VERDE — The Camp Verde Marshal’s Office is investigating the death of a 16-year-old male who was found deceased under an overpass on Interstate 17 late Tuesday night.

At 7:45 p.m. Tuesday, Nov. 16, CVMO received a call from concerned parents regarding their teen-aged son who was overdue from an outing.

“Information was that their son left the residence at approximately 5:45 p.m. for a short ride on his ‘dirt bike,’ which he has done on many occasions,” CVMO spokesperson Stephen Butler said in a statement Wednesday, Nov. 17.

With the help of deputies from the Yavapai County Sheriff’s Office and officers from the Department of Public Safety (DPS), the search began for the 16-year-old male.

By 9:10 p.m., police found the juvenile next to the roadway on I-17 northbound under the Arena Del Loma overpass with apparent fatal injuries.

“Shortly after finding the juvenile, the area was checked and the dirt bike he was riding was found approximately 100 yards to the east of the overpass, on Arena Del Loma,” Butler said.

The juvenile was transported to the Yavapai County Medical Examiner’s Office to determine the cause of death, police said Wednesday.

“A thorough investigation is currently being conducted by CVMO detectives, and medical examiner’s office,” Butler said. “At this time, no final ruling has been determined as to the manner and cause in the death. There is no immediate hazard or threat to the community.”

No further information was provided.