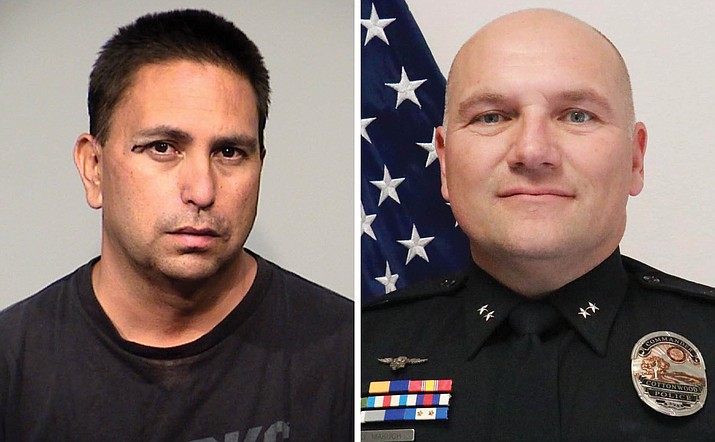 COTTONWOOD — The family of Jody Makuch, a commander with the Cottonwood Police Department who was killed by a drunk driver last year, may finally get some closure after a Yavapai County judge sentenced the man responsible for killing him to 15 years in prison Thursday.

“Our hearts go out to Commander Makuch’s family and we hope this lengthy prison sentence helps to bring them closure,” Yavapai County Attorney Sheila Polk said in a statement Friday, Nov. 19. “His tragic death at the hands of a drunk driver was so unnecessary and is so difficult for many to bear.”

Jason Howard Engel, 42, pled guilty in October to one count of manslaughter and five counts of endangerment after he ran a red light at the intersection of State Route 89A and Willard Street on Sept. 7, 2020, striking and killing Makuch, who was off duty at the time.

“Unfortunately the justice system can never fully right such a wrong and bring a good man back to life. While many of us were hoping for a longer sentence, we respect the judge's decision,” Cottonwood Police Chief Steve Gesell said in an email to the Independent on Friday. “We're hopeful that the expedient adjudication following a plea agreement will be of value to Jody's family as they continue on their long road to some semblance of recovery.”

Multiple witnesses saw the Camp Verde man in a 2001 Chevrolet Tahoe run the red light where Makuch was stationary on his motorcycle waiting to proceed east, according to a police report.

Immediately prior to the collision, two witnesses observed Engle run a red light at State Route 89A and 6th Street heading westbound.

“Multiple other vehicles with passengers on the roadway were endangered by Engel’s reckless driving, which included running two red lights and driving left of center with little or no braking,” Yavapai County Attorney’s Office spokesperson Penny Cramer said in a statement Friday.

At the scene, Engel exhibited signs and symptoms of impairment, and when his blood was drawn within two hours of the collision, results showed a blood alcohol content of .109%, 25% higher than the legal limit.