‘The Nutcracker and the Mouse King’ Ballet premieres onscreen Nov. 28 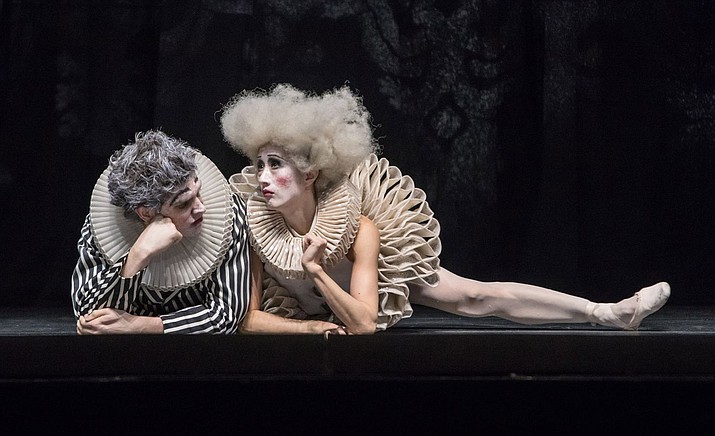 ‘The Nutcracker and the Mouse King’ is a spectacular holiday ballet par excellence, like you’ve never seen it before in a revisited version by visionary choreographer Christian Spuck. (SIFF/Courtesy)

The Sedona International Film Festival presents Ballet in Cinema on Sunday, Nov. 28, when it hosts the big screen premiere of ‘The Nutcracker and the Mouse King’ from Ballet Zürich in Switzerland. There will be one show at 1 p.m. at the festival’s Mary D. Fisher Theatre, according to a news release.

‘The Nutcracker and the Mouse King’ is a spectacular holiday ballet par excellence, like you’ve never seen it before in a revisited version by visionary choreographer Christian Spuck. His mise en scène, poetic and precise, plunges more deeply than most versions into the source text by macabre master E.T.A. Hoffmann, creating a sort of chiaroscuro atmosphere that is both romantic and fantastic, bordering the sublime.

Soloists and corps de ballet of the Ballett Zürich and their Junior Ballett shine in this meticulously executed choreography, featuring a dazzling William Moore in the title role. Tchaikovsky’s sublime and whimsical score is adapted to the artists’ narrative vision, at times interpreted by a simple accordion (played by the splendid Ina Callejas), at others recreated in full by the impeccable Philharmonia Zürich under the baton of Paul Connelly.

Christian Spuck attempts to distance himself from the original Dumas/Petipas ‘Nutcracker’ version in his choreography and puts the literary origin at the heart of his ballet, emphasizing the fantastical nature of the original rather than the delightful Christmas fairytale and bringing back the fairytale of the princess Pirlipat, who turns into a nut monster, as told by E.T.A. Hoffmann.

In Rufus Didwiszus’ stage setting, the workshop of the godfather Drosselmeier turns into an old revue-theater, where the characters of the ballet come to life. Spucks’ choreography plays with the richness of characters in E.T.A. Hoffmann’s narrative cosmos, the absurdity and overwrought humor that inhabit them while at the same time looking down into the dark abyss of Romanticism.

‘The Nutcracker and the Mouse King’ from Ballet Zürich will be shown at the Mary D. Fisher Theatre on Sunday, Nov. 28, at 1 p.m. Tickets are $15, or $12.50 for film festival members. Tickets are available in advance at the Sedona International Film Festival office or by calling 928-282-1177 or online at SedonaFilmFestival.org. Both the theatre and film festival office are located at 2030 W. Hwy. 89A, in west Sedona.