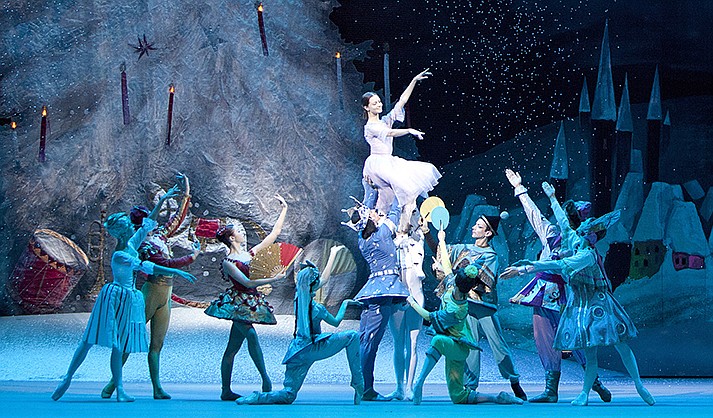 “The Nutcracker” — captured live from the historic Bolshoi Ballet in Moscow — will come to Sedona on Sunday, Dec. 5 at the Mary D. Fisher Theatre, presented by the Sedona International Film Festival. This beloved holiday classic will enchant the whole family with its fairytale setting and Tchaikovsky’s timeless score. (SIFF/Courtesy)

Come and experience a holiday treasure! The Sedona International Film Festival presents Ballet in Cinema on Sunday, Dec. 5, when it hosts the big screen encore of “The Nutcracker” from the Bolshoi Ballet in Moscow. There will be one show at 4 p.m. at the festival’s Mary D. Fisher Theatre, according to a news release.

Christmas would not be complete without the enchanting tale of young Marie and her Nutcracker prince. E.T.A. Hoffmann’s fairytale staged by Russian ballet master Yuri Grigorovich will transport children and adults alike to a world of magic and wonder for the holiday season.

“The Nutcracker” invites audiences of all ages on a magical journey, through a world of enchantment, complete with dancing snowflakes and dolls that have come to life, accompanied by Tchaikovsky’s beloved score.

On Christmas Eve, Marie is given a wooden nutcracker as a gift. When the clock strikes midnight and the celebrations are over, all the toys come to life. The Nutcracker — at the helm of the tin soldiers — transforms and saves Marie from the Mouse King and his army.

After victoriously defeating the mouse army, the Nutcracker — now a handsome young prince — whisks Marie away into their magic boat to the Land of Sweets. Marie and the Nutcracker-Prince are radiant with happiness: they have reached the kingdom of their dreams. Joyous celebrations can now begin. Yet, it appears it was all just a dream.

This beloved holiday classic will enchant the whole family with its fairytale setting and Tchaikovsky’s timeless score. The Bolshoi’s version of “The Nutcracker” has a unique and beautiful sense of romance.