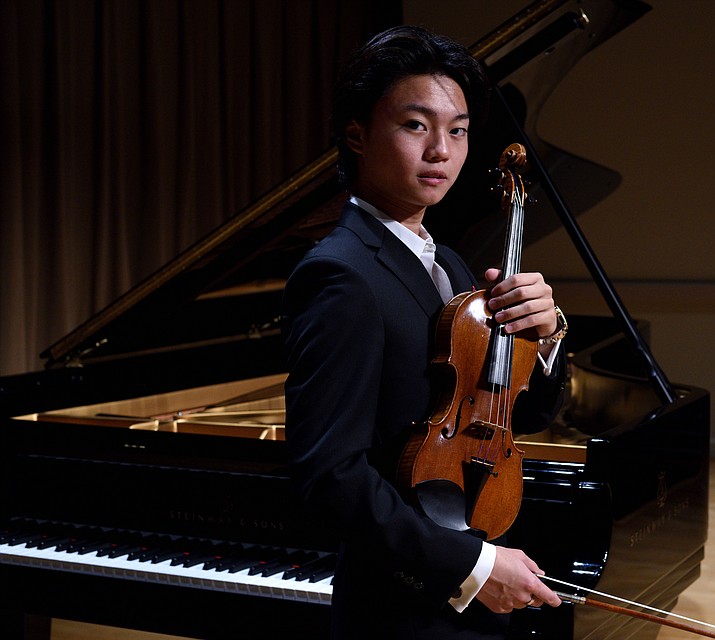 The Verde Valley Sinfonietta will present versatile guest artist Ray Ushikubo on both piano and violin for its opening concert of the season, on Sunday, Oct. 10, according to a news release.

Ushikubo will play the Mendelssohn Piano Concerto No. 1 and a virtuosic solo work for violin and orchestra – the Introduction and Rondo Capriccioso by Camille Saint-Saens. A native of California, Ushikubo is currently a junior attending the Curtis Institute in Philadelphia. He studies piano with Gary Graffman and Robert McDonald and violin with Shmuel Ashkenasi and Pamela Frank.

This concert also features guest conductor Laura Jackson, currently music director of the Reno Philharmonic, and former assistant conductor of the Atlanta Symphony. Jackson has chosen a program that includes another work by Mendelssohn, his Hebrides Overture, also called “Fingal’s Cave,” and Beethoven’s Fourth Symphony. The latter represents a belated anniversary homage to Beethoven, whose 250th birthday took place in 2020.

Ushikubo has a resume with the length and importance of a seasoned performer. Since his orchestral debut at the age of 10 with the Young Musicians Foundation Orchestra in Los Angeles, he has soloed with many orchestras including the Pasadena and San Diego symphonies, and those in Fort Collins, Buffalo, Reno and Westchester.

He won the 2017 Hilton Head International Piano Competition, the 2016 Piano Concerto Competition at the Aspen Music Festival, and was named a Young Steinway Artist. During the 2020-2021 season he recorded Gershwin’s Rhapsody in Blue with the San Diego Orchestra and Beethoven’s 2nd Piano Concerto with the Buffalo Symphony under Maestro JoAnn Falletta.

Ushikubo was featured as a Young Artist in Residence of the NPR broadcast Performance Today with host Fred Child, and he has been featured several times on the nationally syndicated radio program From the Top where he was named one of their Jack Kent Cooke Young Artists.

Jackson is in her 12th season as music director and conductor of the Reno Philharmonic. She continues to win praise for her artistry, leadership, innovative programming, and creative community engagement.

In addition to concerts with the Reno Philharmonic, Jackson guest conducts nationally and internationally. She has performed with the symphonies of Alabama, Atlanta, Baltimore, Berkeley, Charlottesville, Detroit, Hartford, Hawaii, Orlando, the Philippines, Phoenix, Richmond, San Antonio, Toledo, Toronto, Windsor, and Winnipeg in addition to concerts with the Philly POPS and L’Orchestre symphonique de Bretagne in France.

Jackson served as the first female assistant conductor of the Atlanta Symphony Orchestra from 2004-2007. Prior to her appointment in Atlanta, she studied conducting at the University of Michigan and spent summers as the Seiji Ozawa Conducting Fellow at the Boston Symphony Orchestra’s Tanglewood Music Center in 2002 and 2003.

Jackson spent her early childhood in Virginia and Pennsylvania before moving at age 11 to Plattsburgh, New York, where she grew up waterskiing, swimming, and sailing on Lake Champlain. She fell in love with the violin in public school, later attending the North Carolina School for the Arts to finish high school. She pursued an undergraduate degree at Indiana University where she studied both violin and conducting.

The Sunday, Oct. 10, program begins with Mendelssohn’s Hebrides Overture, composed between 1829 and 1824, to recreate in music his impressions of a trip to the Hebrides islands, west of the Scottish mainland. The work has become one of the most popular in the symphonic repertoire. Mendelssohn’s first piano concerto follows. It is one of the most performed concertos in the piano concerto literature, often showing up on competition programs. Franz Liszt, the 19th century charismatic pianist-showman is given credit for making the work famous.

Saint-Saens wrote the Introduction and Rondo Capriccioso in 1863 in response to a request of the distinguished virtuoso violinist of the time, Pablo Sarasate. It evokes Spanish idioms and is a brightly polished gem of the violin repertoire.

Beethoven’s 4th Symphony was championed by Felix Mendelssohn, who programmed it when he was conductor of the Leipzig Gewandhaus Orchestra. The symphony harkens back to Beethoven’s more classical style of composing, and yet is distinctly Beethovenian with forward driving momentum and unexpected harmonic and dramatic effects.