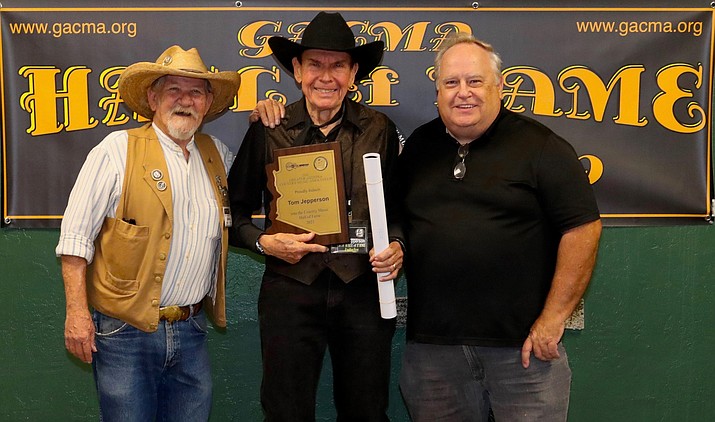 Popular Sedona and Verde Valley entertainer Tom Jepperson was inducted in the Greater Arizona Country Music Association Hall of Fame on Sept. 26 in Phoenix, according to a news release.

Jepperson is known as half of the popular entertainment duo, Tom & Shondra, and also as the beloved character Otis in shows at the Blazin’ M Ranch in Cottonwood.

Besides local and national performances, Jepperson’s resume is packed solid with credits from a lifetime in music and acting. The list includes leading roles in Broadway musical tours, San Francisco, Los Angeles, Civic Light Operas and in contemporary music concert tours across the USA.

He’s performed his own shows in Los Vegas and Lake Tahoe showrooms and on popular cruise ships. In Lake Tahoe, he opened for the likes of Tony Bennett, Shari Lewis and in 2016 opened for The Gatlin Brothers.

“It was my pleasure to nominate Tom into our Hall of Fame. With Tom’s entertainment expertise, talent and background, it was an absolute must that he be included,” GACMA President Skip Gerit, aka John Heerkens said.

“I feel so appreciative to Skip, the board of directors, as well as the whole GACMA Association for this honor. It was wonderful to perform alongside excellent fellow Hall of Famers the night I received my award,” Jepperson said.

Monthly Jam & Dances take place every second Sunday in Prescott at the Moose Lodge from noon to 4 p.m. and every fourth Sunday at the Arizona American Italian Club, 7509 N. 12th Street in Phoenix.