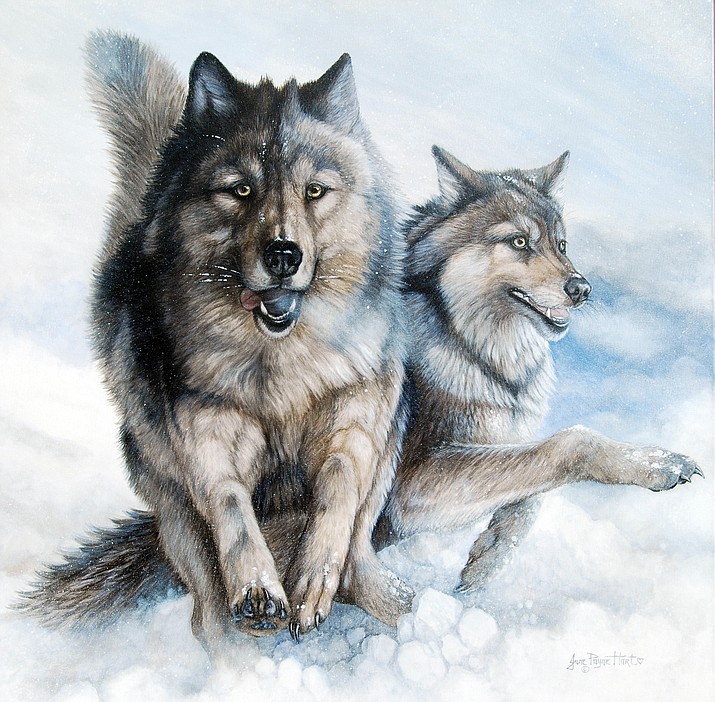 The Village Gallery of Local Artists will feature internationally renowned wildlife painter June Payne Hart for the month of October, according to a news release.

Hart has been a member of the gallery since its inception over 11 years ago and currently shows there exclusively.

Hart’s artwork is inspired by 18th- and 19th-century English artists and her lifelong passion for animals. Her medium of choice is gouache, (an opaque watercolor,) with a top coat of acrylic. This combination creates depth and crisp vibrancy. Her work is painstakingly detailed, as Hart is a perfectionist when it comes to her artwork.

Personality shines through the creatures eyes in Hart’s paintings. True to her warm, friendly makeup, she captures the benevolent side of nature. She jokes, “All my animals are vegetarians.”

Hart’s relationship with the animal world has long been prominent in her life and art. She tells the story of her first experience with paint at age 3 when she decorated the family cat after her father left an open can of green paint unattended.

Later in life, she rescued a tarantula, and in return for her kindness, her new friend “Tranny” helped Hart overcome her fear of spiders. To commemorate that experience, she includes a delicate spider web in her paintings.

Born in England, Hart became the youngest student to gain admission to the Birmingham Collage of Art at the age of 15. She graduated with honors and a degree in Art History. Before launching her art career, Hart worked as a design consultant for Harrods of London, and then was Chief Designer for Accord Greeting Cards.

Hart moved to Sedona in 1980 and began painting high desert scenery. The red rock country serves as a backdrop for many of her paintings, and is the place where she and Ron, her husband of 36 years, call home.

As for the future, Hart plans to create more intricate paintings like “Noah’s Ark - The New Beginning” depicting numerous pairs of animals disembarking the Ark. This piece took two years and is her most ambitious work to date.

Hart’s artwork can be found around the world, from original paintings to greeting cards, puzzles and plates. June’s well known piece “Animal Fantasia: One” found a home in Buckingham Palace as a gift to Prince Charles and Princess Diana upon the birth of Prince William. “A Dog’s Plea” and “A Cat’s Life” helped raise funds for animal rescue and humane societies here in Sedona, and throughout the U.S.

Hart tells stories with paintings like “Young Winston,” the cigar smoking bulldog, or the eagle in “Spirit of America” commemorating the attack on 9/11.

The Village Gallery is a co-op style gallery and is located at 6512 State Route 179 in the Village of Oak Creek. Applications for new membership are always welcome.

For more information, stop by the gallery, call 928-284-1416, or visit the website at sedonalocalartists.com.

Information provided by the Village Gallery.