3 climbers rescued by DPS, sheriff’s office after getting stuck on Touched by an Angel cliff in Sedona 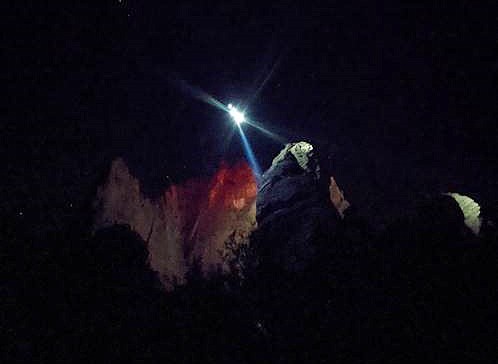 A DPS Air Rescue helicopter hovers over the Touched by an Angel climbing area in Sedona late Oct. 10, 2021. Three hikers were stuck on a cliff about 160 feet off the ground as their repel was stalled due to a rope getting stuck. (CCSO/Courtesy)

SEDONA — Three hikers stuck on a cliff 160 feet above ground on the Touched by an Angel climbing area in Sedona were rescued by multiple agencies after their rappel decent was stalled due to a rope getting stuck, according to a news release.

On Oct. 10 at 6:20 p.m., CCSO received a report of three stranded climbers, who were on their decent from a multi-pitch climb when their rope became stuck and they “were unable to retrieve it to continue rappelling off of the climb,” a news release stated.

“The climbers were approximately 160 feet above the ground at the top of the first pitch,” CCSO spokesperson Jon Paxton said in a statement, adding that the Coconino County Sheriff’s Office Search and Rescue Unit responded to the call and assessed the situation.

“A plan to rescue the climbers using a hoist equipped Arizona Department of Public Safety helicopter was devised and the helicopter responded from Phoenix,” Paxton said. “Upon arrival to the scene around midnight the DPS helicopter determined that the climbers were in a location that could not be reached by rescuers on the hoist as it would require more hoist cable than was available on the aircraft.”

Because the climbers were experienced and uninjured, DPS and CCSO personnel were able to get them another rope and some warm clothing, a radio, food and water so they could set up to continue their rappel.

The helicopter returned to the scene and hovered over the climbers to lower the supplies using a 600-foot search and rescue rope at 3:30 a.m. Oct. 11.

“Once the climbers had the supplies communication was established with them and they were given instructions about how to proceed. It was mutually decided that they would wait until daylight broke to begin rigging the new rope for a rappel,” Paxton said.

“This challenging rescue was a cooperative effort between the stranded climbers, CCSO Search and Rescue, and the DPS Air Rescue units from Flagstaff and Phoenix,” Paxton said. “The sheriff’s office thanks all the responders involved for their efforts.”