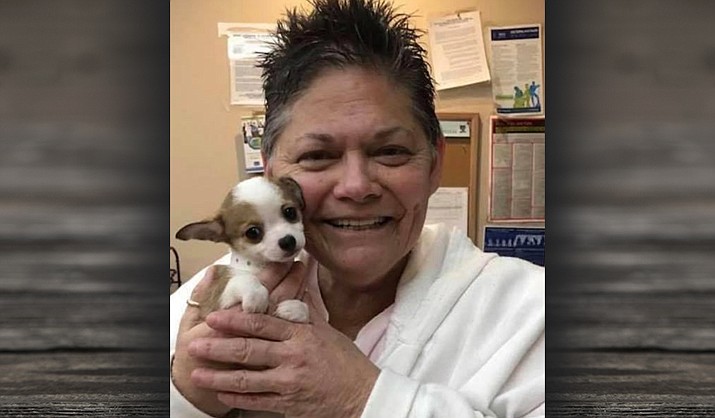 This undated file photo shows Penny Smith holding her dog Sonny, who she received from the Verde Valley Humane Society. VVHS has decided to begin the “Penny and Sonny Smith Memorial Endowment Fund” in her name. Penny passed away Sept. 22, 2021. She was 56. (VVHS/Courtesy)

COTTONWOOD — The board of directors for the Verde Valley Humane Society recently announced that they’ll be naming their endowment fund the “Penny and Sunny Smith Memorial Endowment Fund” moving forward, according to a news release.

Penny Smith, a 56-year-old Cottonwood woman who passed away in a Flagstaff hospital Sept. 22, was a “special friend” to the humane society.

“Penny loved the Verde Valley Humane society and through the Penny and Sunny Smith Memorial Fund, her legacy will live on in perpetuity,” VVHS Board President Victoria Bresnan said.

Amber Polo, secretary for the VVHS, said in a news release that Penny was at a “low point in her life” when a tiny dog named Sunny came into her life from the shelter.

“Though she never weighed more than 4 pounds, she was a giant benefit to Penny,” Polo said. “She sincerely believed she changed her life.”

The humane society hopes that having the endowment in their names will bring happiness to others in the Verde Valley community, and help VVHS provide care for homeless pets.

“Penny’s family is grateful to the VVHS for honoring Penny and establishing a way for her legacy to live on forever,” Polo said.

Donations in honor of the Penny and Sunny Smith Memorial Endowment Fund” can be made in person or by mail at the VVMS, 1520 W. Mingus Ave., Cottonwood, AZ 86326.