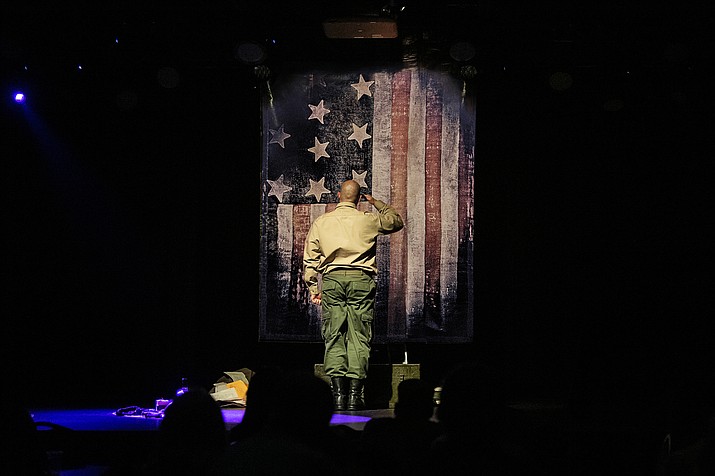 Emerson Theater Collaborative presents The American Soldier starring Douglas Taurel this weekend at the Sedona Arts Academy in the Village of Oak Creek, according to a news release.

The American Soldier is based on real stories and factual accounts from soldier and family member letters written from the American Revolution all the way through current day Afghanistan. It examines the internal struggles and problems that soldiers and their families face when returning home from combat.

The American Soldier has been nominated for the Amnesty International Award for theatre excellence, received four stars internationally, and has been performed at the Kennedy Center and the Library of Congress. The show has been featured in The Huffington Post, The Washington Post, Military Times and Time Out, to name a few, and received overwhelmingly positive responses from veterans and audiences while touring throughout the country.

In 75 minutes, enhanced by the interplay of sound and lights, Taurel enters into the personas of 14 veterans and their family members, telling their stories of courage and sacrifice. The American Soldier exposes their flaws and their scars with both darkness and humor. It is a journey through the American story filled with moments that resound with lasting meaning for both audiences old enough to remember and those young enough to yearn for inspiration.

Taurel explains, “This is a true work of passion and I deeply hope that audiences will go away with a deeper appreciation of the tremendous sacrifice our servicemen and servicewomen, and their families, have made for our country.”

Taurel has been nominated for the Innovative Theater Award and the prestigious United Kingdom Amnesty International Award for his work with The American Soldier.

He was commissioned by the Library of Congress to write, create and perform his second solo show, An American Soldier’s Journey Home, which commemorates the ending of the World War I and tells the story of Irving Greenwald, a soldier in the 308 Regiment and part of the Lost Battalion. He has performed the play twice at the Library of Congress.