Column: Cottonwood students deserve our support, let’s give it to them with ‘Yes’ vote 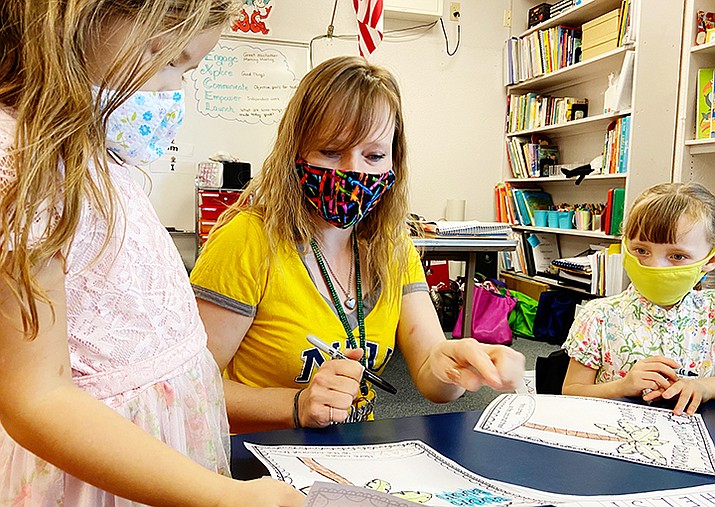 This September 2020 file photo shows a teacher at Dr. Daniel Bright Schools in Cottonwood working with students. The Cottonwood-Oak Creek School and Mingus Union High School districts are asking for a continuation of the seven-year override to help support the maintenance and operations budget. The mail-in ballot is due to county election officials by Nov. 2, 2021. (Independent file photo)

When I woke up Saturday morning to check the news with my morning tea, my last stop was VerdeNews.com to make sure all was in order for our readers.

When I reached the part of the webpage that displays our weekly poll question, I clicked to see the results. Needless to say, I was a bit shocked.

The poll question reads: “The Cottonwood school districts have asked for a continuation of the current seven-year override on the Nov. 2 special election mail-in ballot. The override will continue to fund the ‘M&O’ budget, and not increase property tax rates. What will you vote?”

To my surprise, only 54% chose “Yes” that they would vote to continue the seven-year override to help fund the Cottonwood-Oak Creek School and Mingus Union High School districts.

Obviously, 54% of the vote being a “Yes” theoretically (if our poll was an actual vote count) gets those hard-working school districts the 10% override they are seeking, which for COCSD could mean $1.3 million per year for the next three years to help fund the maintenance and operations budget, and about $800,000 for MUHSD over the same time period.

That means funding for staff salaries, benefits, school supplies, utilities, repair costs, and extra-curricular activities such as sports, art, music and theater can be counted on.

This poll sparked a conversation on our Facebook page. One reader said, “A No vote, however, will lower your property tax.”

True, but honestly, someone paid for your education. That’s what people seem to forget. You grew up in this country, and your public education was paid for by those who came before you. Just because you no longer have children in the system, doesn’t mean you should turn your back on it.

So many others were in support, however. One reader said, “I’m voting Yes-Yes for purely selfish and narcissistic reasons. I want a better future for my kids and grandkids.”

Another reader said, “I would actually vote YES for an even higher percentage than the override.”

We all know there are many problems with the Arizona public school system, especially considering the state is ranked usually in the bottom two or three states in the U.S. in funding every year.

And our political leadership at the state level isn’t helping, either. Yes, teachers were given a 20% raise over the past few years, but shouldn’t they have been at that salary mark already? Did that raise even get our teachers the “average” pay from other states?

Then, instead of continuing to up the school budget numbers just to meet inflation, as a voter-passed law requires, state leadership decided to deny students those funds, and sell off state trust land instead? That’s a very large band aid.

So when the people of Arizona step in and vote “Yes” on Prop. 208 to tax the wealthy a sliver more to help aid in the ridiculously low funding for our classrooms, state lawmakers challenge it, and block it from happening because the potential $800 million the law could raise will crash through the spending cap ceiling Arizona put in place.

That’s right, our state caps education spending. And remember, that cap and its limit was put in place four decades ago!

OK, rant over…sorry, I slightly got off track. But you can see where I’m going with this. We the people need to step up and make sure our kids have the best education possible. If that means voting “Yes” on this override for our Cottonwood schools, then let’s do it!

And please, please remember, a “Yes” vote on this override DOES NOT raise property taxes. This is a continuation.

Remember, Yavapai County voting officials have said not to mail in that ballot after Tuesday, Oct. 26. So, if you’re ready to vote, get it mailed quickly. If you pass Tuesday’s mail deadline, you can drop it off locally at a ballot drop box, which are in Clarkdale (Town Hall, 39 N. 9th St.) and at the county administration building in Cottonwood, 10 S. 6th St. Be sure to do so by 5 p.m. Nov. 2.

Do the right thing!