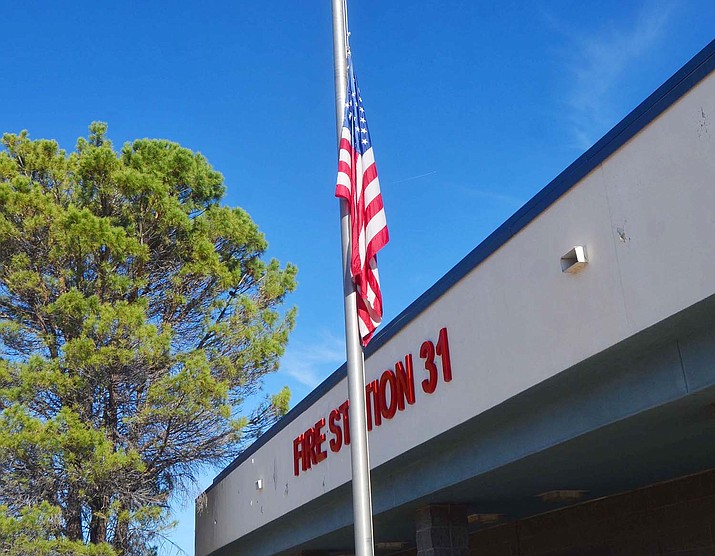 The flag flies at half-staff in front of the Verde Valley Fire District building off State Route 260 in Cottonwood on Friday, Oct. 22, 2021. VVFD Firefighter Tyrone Bell died in a line of duty Monday, Oct. 18, after he succumbed to COVID-19 complications. Bell came into contact with a COVID-positive patient while on duty, according to VVFD Chief Danny Johnson. (Vyto Starinskas/Independent)

COTTONWOOD — Firefighter Tyrone Bell, who died Oct. 18 due to COVID-19 complications, was exposed during a call after coming into contact with patients who were coronavirus-positive, Verde Valley Fire District Chief Danny Johnson confirmed in an email to the Independent this week.

The memorial service will be announced after the weekend for the 35-year-old firefighter, according to Johnson, adding that he could not speak to the particulars of the call itself when Bell was exposed.

“It has been confirmed that Firefighter Bell was exposed from contact with COVID positive patients on duty,” Johnson said Thursday, Oct. 21, in an email.

Bell had spent the last four years as a firefighter with VVFD.

The chief explained that an in the line of duty death means “the firefighter dies from a job-related injury or illness.”

Johnson said once Bell had tested positive, he had no contact with other VVFD firefighters.

“No other firefighters are sick due to this incident,” Johnson added.

“Our firefighters have respiratory protection, eye and face protection, gloves and disposable suits. We also have decon procedures for equipment and clothing,” Johnson said.

The VVFD does not require COVID-19 vaccinations for employment at this time, he said.

A total of 15 VVFD employees have tested positive during the entire pandemic, the chief said.

Bell worked for the Clarkdale Fire Department before being hired full-time at Verde Valley Fire in 2017.

“To know Tyrone was to love him,” Johnson said. “His passing will leave a huge void here at Verde Valley Fire District.”