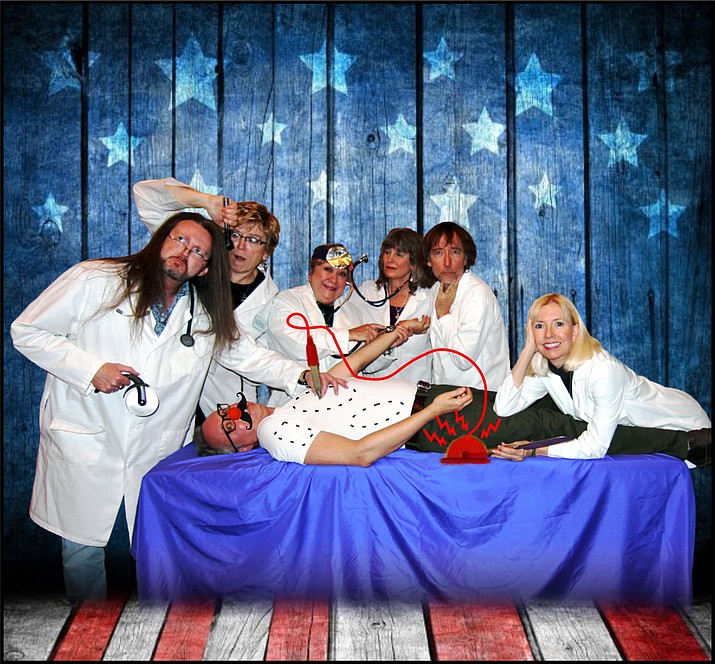 Zenprov Comedy is back with all-new laughs in their live improvised show “Laughter: America’s RX!” on Saturday, Sept. 11, 2021, at 7:30 p.m. at the Mary D. Fisher Theatre in Sedona. (Zenprov/Courtesy)

Zenprov Comedy is back with all-new laughs in their live improvised show “Laughter: America’s RX!” on Saturday, Sept. 11, at 7:30 p.m. at the Mary D. Fisher Theatre in Sedona, according to a news release.

Tickets are $15 each and can be purchased at SedonaFilmFestival.com, or at the box office.

After a socially, emotionally and physically divisive year, Sedona’s favorite comedy troupe is here to remind us that a shared laugh can bind people together like nothing else.

The venue will host a maximum of 60 seats of the available 109 seats so people can socially distance. Masking is required when entering and exiting, but not when sitting in your seat.

The troupe is fully vaccinated, and the theatre has installed state-of-the-art air purifiers in the ventilation system that scrubs the air to eliminate viruses and cooties of all sorts.

As Patrick Schweiss, executive director of the Sedona International Film Festival joked at the last show, “You’ll be cleaner when you leave than when you walked in.”

Joining Zenprov on stage as a special guest performer will be Jessica Mitolo. Jessica hails from the famed Second City School of improvisation in Chicago, where she works as a professional improv acting coach, performer, and comedic director for improv and sketch groups.

In addition, Jessica teaches classes and works with troupes from around the world.

“We super excited to have Jessica with us in person,” said Derek Dujardin, director of Zenprov Comedy. “We’ve been working with her via Zoom since March of 2020, yet we’ve never met her in person. She will spend a week in Sedona doing rehearsals and workshops with us prior to the show. I credit Jessica with helping our troupe achieve a whole new level of performance proficiency. Plus, she has given us a smorgasbord of new games to play and forms to practice. She’ll probably direct a couple of pieces in the show and jump into an energetic long-form called ‘Beer, Shark, Mice.’”

If you’ve never been to one of their live performances before, Zenprov Comedy is similar to the popular improvised TV show “Whose Line Is It Anyway?” The troupe performs a mix of fast-paced improvised scenes created in the moment based on audience suggestions and Chicago-style, long-forms like “The Harold.” Unlike sketch or standup comedy, nothing is scripted or prepared ahead of time, so it’s never the same show twice.

For more than a decade, Zenprov has tapped into the rich source material that comes from living in a place steeped in spiritual seeking, small-town politics, UFOs, vortexes, radical vegans, and endless roundabouts.

So while Zenprov Comedy may start in the New Age culture of Sedona, their otherworldly performances are grounded in the rock-solid fundamentals of quick-witted improvisational acting, inventive satire, and a constant search for the meaning of life hidden inside the great Cosmic Giggle.

“Zenprov is the best comedy troupe in Arizona,” Schweiss said. “People were laughing so hard their cheeks were hurting.”

Purchase tickets ahead of time at zenprovcomedy.com or the Mary D. Fisher Theatre’s box office or online at SedonaFilmFestival.com.

The Mary D. Fisher Theater is located across the street from the Harkins Movie Theater on 2030 State Route 89A, next door to BMO Harris. Doors open at 7:20 p.m. The show starts promptly at 7:30 p.m. and concludes around 9:15 p.m. Beer, wine, and snacks are available in the lobby.