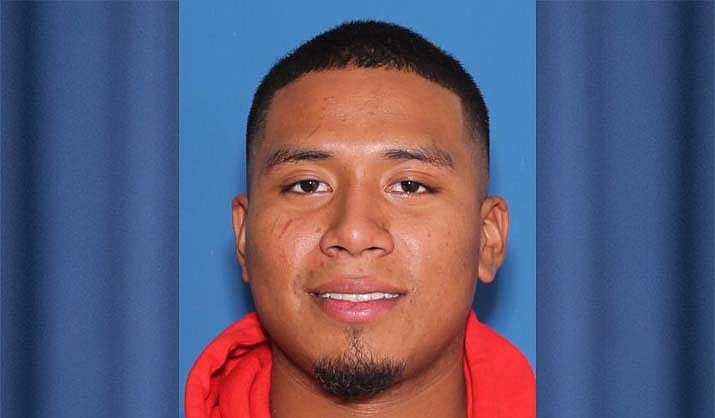 Malachi Cardona of the Yavapai-Apache Nation in Clarkdale was arrested for burglary and weapons charges after he broke into two homes, a car and fired 17 shots out of a rifle Monday, Sept. 6, 2021, in Clarkdale. (Clarkdale PD/Courtesy)

CLARKDALE — A 26-year-old Clarkdale man who allegedly broke into two homes and fired 17 shots from a rifle was arrested on Labor Day, according to a Clarkdale Police Department news release Monday.

Malachi Cardona, who is part of the Yavapai-Apache Nation community in Clarkdale, was arrested and booked into Yavapai County Jail on alleged charges of burglary, misconduct involving weapons, discharging a firearm in city limits, prohibited possessor, use of a deadly weapon during the commission of a felony and endangerment.

Clarkdale Police spokesman Joe Candelaria said in an email to the Independent on Wednesday, Sept. 8, that they believe drugs may have been a factor, but they “cannot confirm.”

At 8:43 a.m. Monday, Sept. 6, Clarkdale Police officers were dispatched to Lamar Lane on a call of a male suspect, who was wearing “all black and firing a rifle in town limits.”

The initial officer who arrived on scene spoke to the homeowner where the suspect had entered, and he verified he and his family were out of town and no one was allowed at the house.

The Clarkdale officer requested back up from surrounding agencies and units from the Cottonwood Police Department, Yavapai County Sheriff’s Office and Yavapai-Apache Police Department responded.

A perimeter was established around the home and officers made loudspeaker announcements, ordering the suspect to exit the home unarmed, according to a news release.

“The suspect was arrested at the back of the residence after he exited the home and went to the roof of the garage,” Candelaria said in a statement.

The suspect was identified as Cardona of the Yavapai-Apache community in Clarkdale.

During the investigation it was discovered that Cardona had broken into two homes and a vehicle on Lamar Lane. The rifle fired by Cardona was stolen during one of the burglaries. Officers on scene recovered 17 spent rifle cartridges and evidence from all three burglaries were also found on Cardona, according to a news release.

Clarkdale officers spoke to several witness and canvassed the area to ensure there were no injured persons or damage to homes, a news release stated.