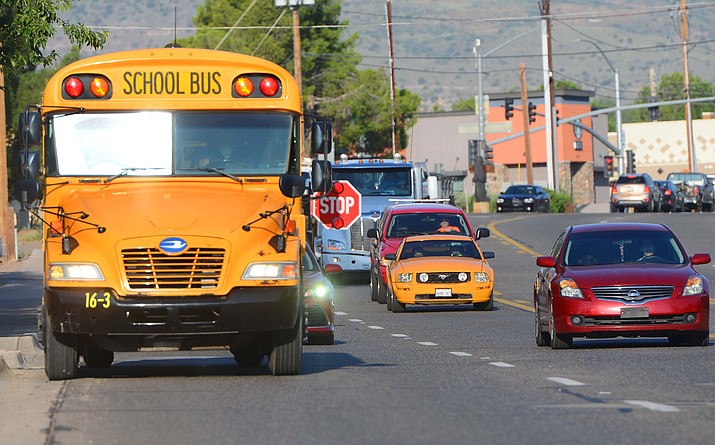 COTTONWOOD – Parents put children on a school bus safely every morning, but bus drivers and police officers are making sure the bus trip doesn’t become the most dangerous thing they do all day.

Transportation Director J.R. Roland, who drives a bus for the Cottonwood-Oak Creek School District, said he sees a vehicle run his stop sign on his bus about once a week.

It can be nerve-wracking while he’s seated inside a bus at the wheel, and small children are outside the bus trying to cross the street and vehicles don’t stop.

“We got to try to have those discussions with the students of how to react when they hear us blow the horn at them,” Roland said. “If we are blowing the horn at them, then that means definitely danger is very, very near.”

So the district has partnered with the Cottonwood Police Department to conduct increased school-area traffic enforcement in September, and the school district is having bus evacuation training for all COCSD students next Thursday and Friday.

Officers will be watching for traffic violations such as motorists speeding through school zones and vehicles driving past school bus warning devices such as flashing lights with stop arms and pedestrian crosswalks.

Police officers, who have come in early on school detail, have issued two citations this week, according to Cottonwood PD. The vehicle they drive has “ghost markings” on the cruiser which makes it more difficult to detect.

“Our community has had an increase in the number of drivers that are disregarding school bus safety stop arms,” explained the COCSD. The district is working very closely with Cottonwood PD as well as Yavapai County Sheriff’s Office (YCSO) to increase awareness and enforcement of school bus safety laws.

Roland said the location where many motorists have been passing school buses is on State Route 89A in Bridgeport near Verde River bridge.

Even though it’s five lanes, two lanes each-way and a center medium, motorists are required to stop in each direction, Roland said. People don’t understand that the center lane has to be a physical barrier like divider up by the Catholic Church in order not to stop if they are coming the other way.

Some motorists pass in the same direction that the bus is going, he pointed out. If a motorist is behind a bus, and the amber lights go on, Roland said they should stop and not try to pass the bus and get caught by the buses’ stop sign arm.

The bus drivers are aware of the cars around them in their mirrors and try to swing out the stop sign at the appropriate time to load or drop off the students safely, Roland said.

Other high-risk areas for the buses are around the four schools, by the duck pond in the Verde Village, Del Rio Drive near the Mountain View School and at Eagle View Drive.

Traffic will get kind of backed up there a little bit in the morning time and people will get impatient and “not do the right thing,” he said.

Roland said there is a shortage of bus drivers right now because of the pandemic and a lot of the drivers are retired people.

“Right now we are about five drivers short, minimum,” he said.

The school district trains the bus drivers, and they need to a pass background check and have a clean driving record.

Bus drivers go through 14 hours of classroom training and 20 hours of behind-the-wheel training.

Half the drivers are women, Roland said. “Ladies do a really, really good job.”

“It is nerve-wracking. You have to have a special personality to be a bus driver,” Roland said. “There’s a lot that goes on.”

“I will let them know before they go down the steps of the bus, ‘this is what I need you to do.’” Roland said referring to the students. “And I need you to obey what I am asking.”