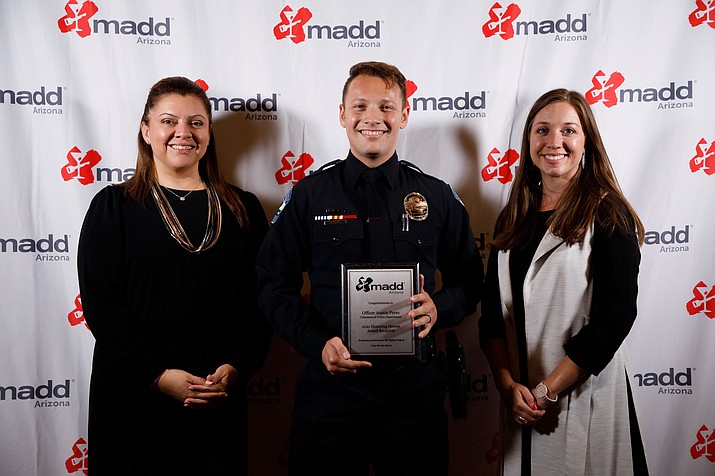 Cottonwood Police Department Officer Austin Perez was recently named the 2021 “MADD” Officer of the Year. Perez accounted for more than 20% of all DUI arrests for the entire police department in the past year. (Cottonwood PD/Courtesy)

COTTONWOOD — Cottonwood Police Department Officer Austin Perez was recently recognized by Mothers Against Drunk Driving (MADD) for his outstanding work in taking impaired drivers off the streets, according to a news release.

Perez graduated from the Northern Arizona Regional Training Academy in May of 2020 and immediately began making an impact on reducing the number of impaired drivers in the Verde Valley, a news release stated.

“Over the last year, Perez has accounted for more than 20% of all DUI arrests for the entire police department, including outpacing the two dedicated traffic units,” Cottonwood PD spokesperson Chad Sinn said in a statement. “Officer Perez takes extreme pride in making the community safe.”

Perez and is also looking forward to attending Drug Recognition Expert school in the future as well to enhance his DUI investigation abilities.

“He is always eager to learn and contribute to the team effort and brings a level of positivity that goes unmatched,” Sinn said. “Officer Perez loves educating people on the dangers of impaired driving.”

Perez has participated in programs such as the Cottonwood Police Department Cadets, Trunk or Treat and Know your Limit.

For more information about the MADD organization, please visit madd.org.