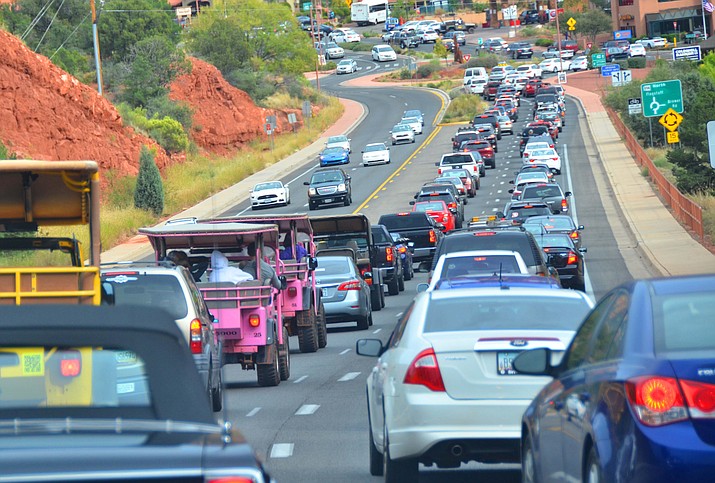 In this undated file photo, traffic backs up along State Route 89A near the “Y” roundabout in Sedona. The Arizona Department of Transportation is scheduled to begin a project in the City of Sedona that will “modernize” the intersection of State Routes 89A and 179. (Independent file photo)

SEDONA — The Arizona Department of Transportation is scheduled to begin a project in the City of Sedona that will “modernize” the intersection of State Routes 89A and 179, also known as the “Y” in Sedona, according to a news release.

The construction modernization scheduled will include pavement rehabilitation, signage, striping and other improvements, an ADOT release stated.

“Concrete removal and replacement on ADA ramps began Wednesday,” a news release stated. “Paving is not scheduled to begin until early October, and much of that work will be done at night over a two-week period to minimize disruptions to adjacent businesses and the traveling public.”

The project is expected to be completed in November.

After a detailed analysis of testing data in summer 2020, ADOT and the City of Sedona did not see enough of a benefit to continue moving forward with the project as initially scoped, a news release stated.

“Thus, the proposal to add a slip lane at the intersection will not be pursued. As a result, no lanes will be added or changed, and there will be no encroachment on private property,” a news release stated.

Schedules are subject to change based on weather and other unforeseen factors.

For more information, please call the ADOT Bilingual Project Information Line at 855-712-8530 or go to azdot.gov/contact and select Projects from the drop-down menu.

Information provided by the Arizona Department of Transportation.