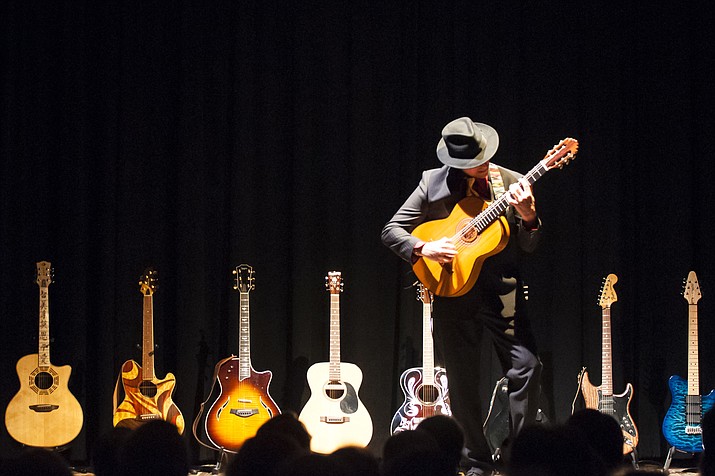 Anthony Mazzella’s “Legends of Guitar” show is a dazzling spectacle featuring one of the most highly-skilled musical artists in the country channeling the raw power of living and deceased guitar legends with multiple instruments on stage. (SIFF/Courtesy)

On Saturday, Sept. 25, Anthony Mazzella’s “Legends of Guitar” concert will be rocking the Mary Fisher Theatre in Sedona. Anthony has added new songs to his repertoire so be sure to come hear his latest interpretations of guitar classics.

“Legends of Guitar” is a tribute show to famous guitar players and their music. The show features world renowned guitar virtuoso Anthony Mazzella who plays it all live. Legendary guitarists whose music is featured in the show are Jimi Hendrix, Eric Clapton, Carlos Santana, Jimi Page (Led Zeppelin), The Edge (U2), Pete Townsend (The Who), David Gilmour (Pink Floyd), George Harrison (The Beatles), Segovia and more.

“You’ve gotta let Zeppelin possess you if you’re gonna do it right,” guitarist extraordinaire Anthony Mazzella revealed to the audience, deep into his set of the one-man-show “Legends of Guitar.”

Sedona music lovers, take notice! It doesn’t get much more perfect than this. The dazzling spectacle witnessed at Relics Roadhouse saw one of the most highly skilled musical artists in the country musically “making love” to his cherished guitars on stage, channeling the raw power of living and deceased guitar legends. The energy birthed from this musical ceremony held the audience spellbound in its passionate embrace.

Mazzella is a professional recording artist, concert guitarist and producer. BILLBOARD Magazine describes him as “the new generation of guitar hero” and GUITAR ONE magazine voted him “one of the top ten guitarists in the country.” Mazzella released six CD’s and currently performs regularly statewide in Arizona.

Mazzella began his performance career as a concert guitarist in New York City. He quickly built up a strong following performing in most every live music club in Manhattan including The Bitter End, CBGB’s, Cat Club, Cafe Wah, Birdland etc. Anthony then landed a headlining spot at the BLUE NOTE NYC just one year after street performing in front of it and spent the following years touring colleges & universities all over the USA.

He then went on to performing on stages all over the world as a solo artist and as the concert guitarist for world music master Omar Faruk. Mazzella also performs internationally at private events for Wynn Las Vegas, Bellagio, The Mirage, Montage, Microsoft, Toyota, AT&T, Samsung, Nike, Puma and has opened for headlining artists, James Brown, Tower of Power, The Commodores and others.

A video demo of the show, photos, and reviews can be seen at anthonymazzella.com.

For tickets and more information, please call 928-282-1177 or to order online, visit SedonaFilmFestival.org. You may also purchase tickets at the Sedona Film Festival office and Mary D. Fisher Theatre, located at 2030 W. State Route 89A, in west Sedona.