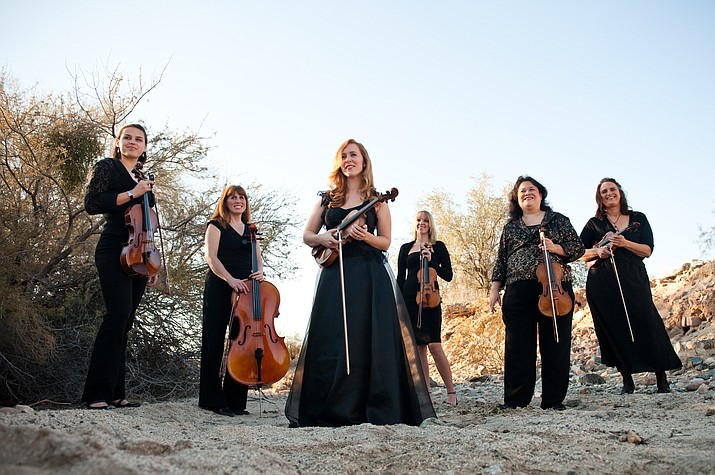 Rated one of the 25 coolest film festivals in the world in 2017 by MovieMaker magazine, the eighth annual Jerome Indie Film and Music Festival is scheduled to take place Thursday through Sunday, Sept. 23 to 26, according to a news release.

“We are edgy, unexpected and are always looking for ways to surprise our guests,” film festival spokesperson Toni Ross said. “Each year we seek high and low throughout Jerome to screen independent films in the most unexpected places. We have screened films on a train, at a haunted gold mine, inside wineries, at surprise hilltop residences, in the basement hallway of a hundred year-old high school, and inside rustic buildings throughout Jerome.”

For the eighth installment of the Jerome Indie Film and Music Festival, guests will be offered several new and extraordinary events, which include the Bartlett Concert and Liberty Theatre Showcase where Sweetwater Strings will be performing ACDC, Led Zeppelin and other metal sounds on their strings. They will also be performing iconic movie themes.

Guests will then travel to the Liberty Theatre to watch a short showcase of independent films. Virgin Cheese, the film festival’s newest partner, will provide decadent cheeses to guests of this event and desserts will be provided following the short film showcase inside the liberty theatre.

The festival is holding the inaugural Mad Hatter Tea Party on Sunday, Sept. 26, in a secret Jerome garden where guests will enjoy live music while they enjoy sandwiches, mouth-watering cheeses provided by Virgin Cheese, decadent desserts and of course spectacular teas. Guests are encouraged to dress either in Mad Hatter themed outfits or don a funky hat.

A special screening Saturday, Sept. 25, is “Firestorm ‘77.” Firefighters throughout Verde Valley are invited to this screening for free, plus one0 guest. Survivors of the fire will be conducting a panel after the film.

Synopsis: A combination of hurricane-force winds and the snapping of an electrical pole starts the Honda Canyon Fire on Vandenberg Air Force Base, California, early in the morning of Dec. 20, 1977. Over a thousand people consisting of professional firemen and military personnel fight the fire. Outlier winds would increase to over a hundred miles per hour, making the firefight almost impossible.

As most everyone knows, Jerome is known as America’s largest ghost town and fans or horror and suspense will definitely be thrilled to see “Scare Us,” which will be screening inside the Liberty Theatre on Saturday, Sept. 25.

Synopsis: A chilling horror anthology comprising five short stories, penned by an unlikely group of aspiring writers, in Sugarton – a small town plagued by the apparent return of an infamous serial killer, dubbed “Cutthroat.” They’ve come to share their scary stories (with each other and the bookstore owner, Peter, who leads the group), but soon discover they’ve become the stars of a sick killer’s own twisted tale.

We can’t forget to talk about the film festival’s signature event, the Wicked Wild West Cinema Train, which is sponsored this year by El Toreo Mexican Food Restaurant in Clarkdale.

Guests who purchase this pass will enjoy a four hour train ride where they will listen to live music performed by Scott Jeffers on the outdoor car and then will take in a short showcase of films on the indoor car.

The train departs from the Verde Canyon Railroad on Saturday, Sept. 25, at 1 p.m.

“We encourage everyone who takes the train to dine at El Toreo after for some delicious Mexican food and the best margaritas in the Verde Valley,” Ross said.

This year, festival founders have decided to cut the cost of single tickets by 50% understanding all of the financial difficulties that COVID-19 has caused this past year and a half. Single tickets are now just $8.

“We really want to encourage people to get out and take in some culture all the while saving money,” Ross said.

As always, residents of Jerome, Clarkdale, Cottonwood, Cornville and Camp Verde receive 25% off on Saloon, Cowboy and Blacksmith passes with proof of residency.

Tickets are now on sale at jeromefilmfestival.com.

The festival is looking for local volunteers. Anyone interested please contact Doreen at doreen.jeromefilmfestival@gmail.com. Our volunteers always have a great time volunteering and becoming members of our fest but also get many perks including free.

Information provided by the Jerome Indie Film and Music Festival.