Review: A strenuously woke ‘Cinderella,’ for the #MeToo era 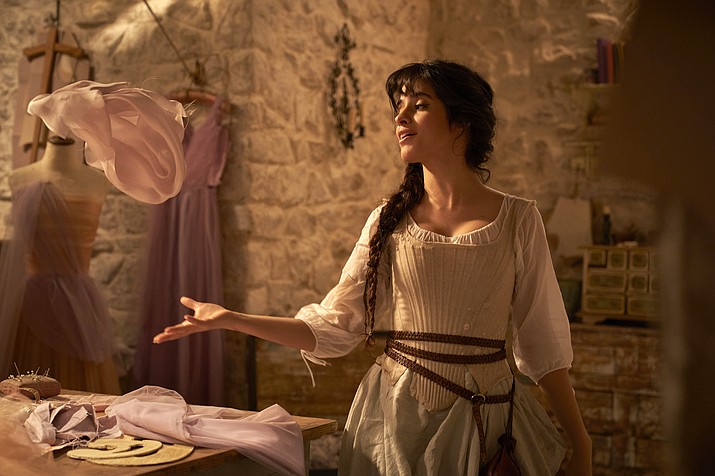 ‘Cinderella’ a modern movie musical with a bold take on the classic fairy tale stars Camila Cabello, Billy Porter, and Nicholas Galitzine. Released by Amazon Studios, it is rated PG by the Motion Picture Association of America. (AP photo)

Their love declared, their fairytale kiss accomplished, Cinderella has an urgent request for her Prince. Can she get a lift to her business meeting?

And so, as princes are wont to do, he scoops his new love off her feet to carry her to his horse. But, like, she’s in a rush. “No, I can walk, it’s faster,” she chirps. “But thanks!”

It’s a throwaway moment but perhaps a nice example of both the assets and flaws of this new, decidedly woke, pop-music infused “Cinderella” for the #MeToo era, written and directed by Kay Cannon (and co-produced by James Corden, who doubles as a mouse). A feminist recasting of the familiar story is welcome, of course, but the screenplay focuses so insistently on its female-empowering message that it feels at times like we’re just getting hit over the head with it.

Thankfully there are also moments, like this, that are rescued by playful chemistry between our appealing leads: ebullient pop singer Camila Cabello as Cinderella, and newcomer Nicholas Galitzine as Prince Robert. Supporting roles are given a playful workout by pros like Pierce Brosnan as the king — going all in for the comedy — and a touching but underused Minnie Driver as his stifled queen.

There’s also a reliably eye-popping turn by Billy Porter as the fabulous (“Fab G”) fairy godmother, but alas, it’s only one scene plus a bit of narration. As always, Porter knows how to make an entrance, but for the most effective use of a star here, look to Idina Menzel, who lends texture to the usually one-note “evil” stepmother. And, of course her clarion singing voice — which we can objectively say is the finest in the land.

The most obvious problem in updating “Cinderella” for a 2021 audience is, of course, its premise that for a woman, marrying well is the only goal; Life is lived through your man, whether you’re Cinderella, stepmom Vivian (Menzel), stepsisters Malvolia and Narissa (Maddie Baillio and Charlotte Spencer) or even the queen (Driver).

Cannon addresses this by having Cinderella — she calls herself Ella here, because why define a girl by the cinders on her face? — dream not of marriage but of business success, as a designer. In an early number, the servant girl comes face to face with her imagined future self, and she’s no royalty — she’s the owner of “Dresses By Ella.”

But that’s a dream too far. In this kingdom, women don’t run businesses. Everyone says this, especially Vivian, who, we learn, once also dreamed of being more than a wife. We get a sense early on that Vivian’s cruelty — less cartoonish than in other versions — stems from deep personal disappointment, and that her fierce desire to marry off her daughters is born of bitter pragmatism.

This nuance serves the film’s message well, but the characterizations can be confusing. It’s rather jarring to go from a moment where Vivian seems to genuinely care about Ella to where she viciously hurls ink at the dress she’s spent weeks designing. It’s also hard to pin down the stepsisters — are they nasty, or not? In any case they get only kindness from Ella. When one asks her if she looks pretty, Ella says yes, but adds: “What matters is how YOU feel when you look in the mirror.”

The plot moves briskly forward, narrated in part by the Town Rapper, who announces the ball where Robert will choose a bride. A smitten Robert has already met Ella in disguise, and convinces her to attend the ball so she can meet wealthy potential clients.

As we already know, the evil stepmom will ALMOST keep Cinderella from the ball. And the fairy godmother — sorry, Fab G — will step in. And the clock will strike midnight, a glass slipper will be lost, and the Prince will go searching.

We won’t give away more details, but there’s nothing so drastic here that people won’t end up Happily Ever After. Yet if there’s a catchphrase here, it is not that: it is “I Choose Me.”

If only this admirable message weren’t reinforced so strenuously, and knowing laughs weren’t so few and far between. Among these laughs, there’s a good one about shoes, wherein Ella complains to Fab G about the uncomfortable glass slippers. These are women’s shoes, Fab G replies: “Magic has its limits.”

So, alas, does this new “Cinderella.” But however it measures up to its predecessors (and inevitable future iterations), you can’t argue with the lesson — for youngsters of any gender — that your destiny belongs in your own hands, not in those of someone who chooses to pluck you magnanimously from your own story and place you in theirs.

“Cinderella,” an Amazon Studios release, has been rated PG by the Motion Picture Association of America “for suggestive material and language.” Running time: 113 minutes. Two stars out of four.