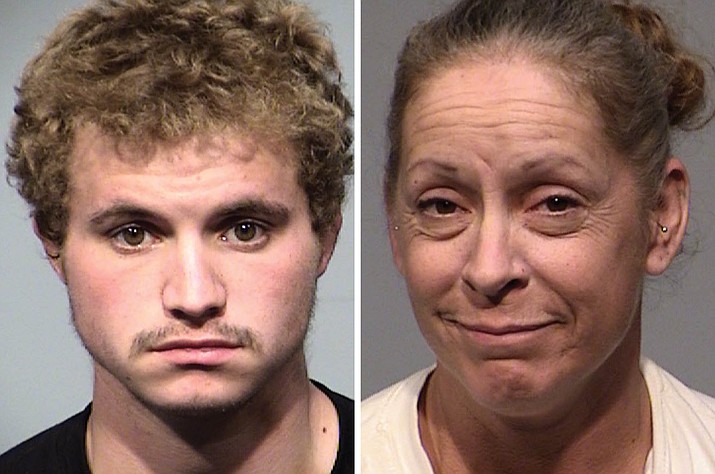 COTTONWOOD — Two Cottonwood residents were arrested by police this week after one allegedly stole a vehicle and the other helped commit a burglary, according to a news release.

On Tuesday, Sept. 21, a Camp Verde Marshal’s Office spotted a vehicle that was reported stolen just a few days prior. It was occupied by 19-year-old Gavin Duval of Cottonwood, and Melissa Peterson, 47, also of Cottonwood.

The car was originally reported stolen Sept. 18 when Cottonwood Police Department officers took the initial report in the 200 block of South 17th Place.

“The stolen vehicle was entered into the police database as stolen and information about this vehicle was sent out to surrounding agencies,” Cottonwood PD spokesperson Sgt. Chad Sinn said in a statement.

After detaining Duval and Peterson, the CVMO deputy conducted a search of the vehicle and located multiple .380 handguns, including multiple jewelry items and collectable silver coins.

“As the investigation continued officers learned of a residential burglary in the Cottonwood area where these items were stolen from,” Sinn said.

Based on evidence recovered and statements made during interviews of Duval and Peterson, both were arrested for the alleged burglary.

The investigation as of Thursday, Sept. 23, has yet to link Peterson to the car theft.

Duval was booked into the Yavapai County Jail in Camp Verde on charges of theft of means of transportation and burglary in the second degree. He is currently in custody on a $5,000 and $2,500 paper bond.

Peterson was also booked into the Yavapai County Jail on charges of burglary in the second degree, false reporting to law enforcement and theft. She remains in jail on a $5,000 paper bond.