Arvel Bird set to perform at Old Town Center for the Arts Oct. 2 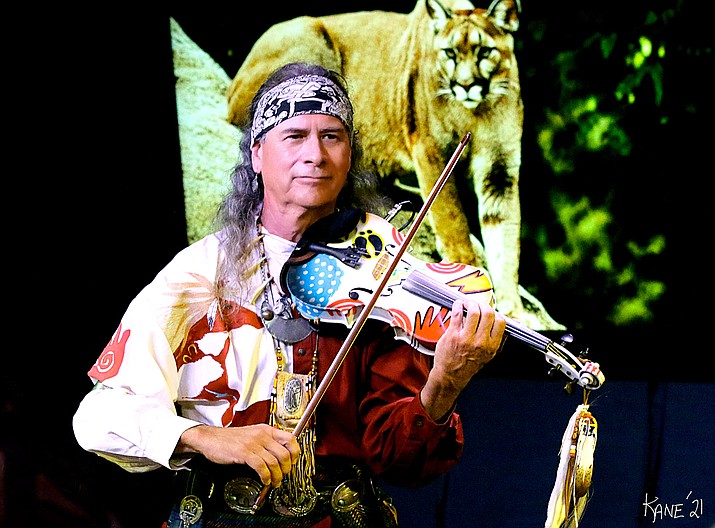 The Old Town Center for the Arts presents the incomparable Celtic Indian Arvel Bird on Saturday, Oct. 2, at 7 p.m., according to a news release.

Bird, named by the prestigious Cowboy and Indian Magazine as one of the Top 4 favorite Native American Musicians, along with Buffy St. Marie and R. Carlos Nakai, is a violinist, flutist and composer who brings to life the dramatic connection between Native American and Celtic traditions, stirring up scenes that echo from North American memory.

Arvel’s Animal Totem Concert combines animal spirit essence with his specially composed music to evoke the characteristics and powers of birds and animals. His stories paint a visual description of not only his own power animals, but also historical anecdotes of how traditions around the world have engaged in Shamanic practice using the animal totems as guides, oracles, and protectors in non-ordinary reality.

Come enjoy an evening of violin, storytelling, Shamanic Journey, and self-revelation.  Look within to know the truth. Bird has won the coveted title of Artist of the Year at the Native American Music Awards (Nammys), quickly followed by Best Instrumental Album at the Canadian Aboriginal Music Awards (Cammys) and others.

Bird is a classically trained violinist who has played with such top country stars as Glen Campbell, Loretta Lynn, Ray Price, Louise Mandrell, and many more. His mixed-blood heritage of Southern Paiute Indian and Scottish is the inspiration for his new compositions. He has created such a unique and universally appealing sound with his blend of instruments and styles that it can best be described as World Native Fusion.

Although once based in Nashville, Tennessee, he now calls Cottonwood home and still connects with audiences the old-fashioned way … live.

“This concert will be The Animal Totem concert, pulling music of Animals from my 3 Animal Totem CDs in genres from Native American inspired to Contemporary to World music,” Bird said. “Welcome to my journey into the Lower Kingdom of the Animal Spirit Helpers. I will be your Tour Guide. Join me for an evening of music, stories, and Animal Wisdom.”

Tickets for Arvel Bird are $20 in advance and $22 at the door, $25 Priority seating in the first three rows. Tickets are available online at showtix4u.com in Cottonwood at Desert Dancer; and in Sedona at The Sedona Film Fest Box Office. Old Town Center for the Arts is located at 5th Street and Main Street in Old Town Cottonwood.

Information provided by Old Town Center for the Arts.