Tractor-trailer rolls over onto van exiting I-17, killing 1, injuring others 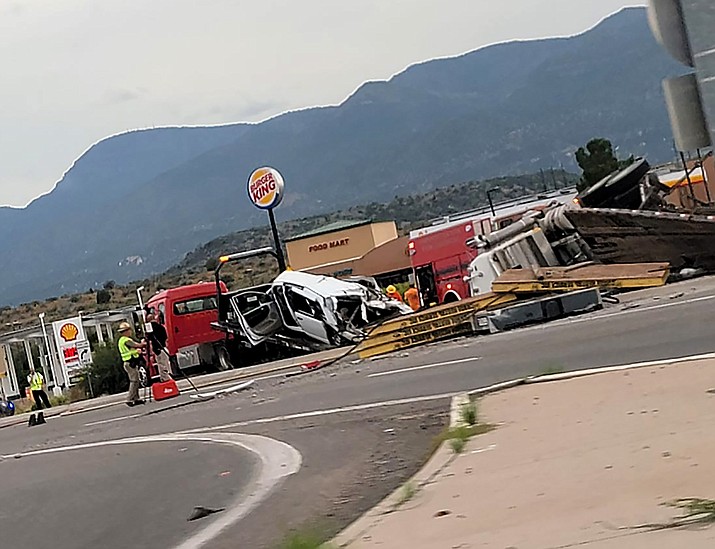 Police and rescue crews clear the scene on State Route 260 near Interstate 17 in Camp Verde on Wednesday, Sept. 29, 2021. (Brittyn Cabral/Courtesy)

CAMP VERDE – A fatal crash between a tractor-trailer and two passenger vehicles near the Interstate 17 northbound off-ramp closed State Route 260 in both directions Wednesday, Sept. 29, afternoon.

One person was deceased at the scene, according to the news release by the Copper Canyon Fire District.

The injured were transported by ground and by air. The collision is still under investigation by the Department of Public Safety, said Copper Canyon Fire.

“The driver of the commercial vehicle told investigating troopers he lost air in his brakes and attempted to make a right turn onto SR 260,” DPS spokesperson Bart Graves said. The vehicle was pulling a flat-bed trailer with steel plates heading northbound on I-17.

“The commercial vehicle rolled over while attempting to make the turn, striking a pickup truck before rolling over onto a van,” Graves said.

Deceased at the scene was a passenger in the van, a 78-year-old male, police said. The driver and passenger of the pickup had minor injuries and the driver of the van was treated at a nearby hospital and released, Graves added.