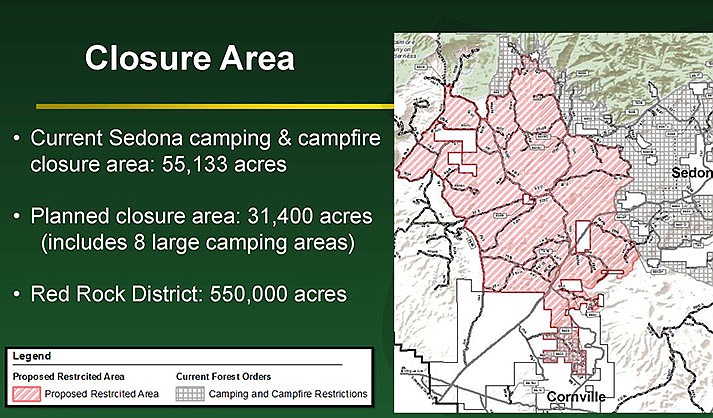 APS 69kV Powerline: The main concerns from citizens regarding the Draft Environmental Assessment (EA) were wildfire risk and impacts on scenery, cultural resources, wildlife, soil and water, recreation resources (Kel Fox Trail) and visual concerns both from residences and the Forest. Consideration of a “micro-grid power system in lieu of the proposed powerline” was also voiced. After the Draft Decision is issued, parties who submitted comments previously on the Draft EA who feel their stated concerns were not fully addressed will have 45 days to submit arguments.

BPRCC submitted comments and has the option to respond to the Draft Decision.

West Sedona Designated Camping Project: Chris Johanson (USFS) reviewed the project, noting that high use has resulted in an increased number of undeveloped camping areas. To contain fire risk and protect wildlife habitat, rangeland and cultural resources, a large site in West Sedona will be closed (31,400 acres) and replaced with eight designated smaller camping areas (pods), allowing for 150-200 campsites. The new areas will be fortified with boulders to reduce potential expansion beyond the designated sites.

Trailhead Shuttles: The two initial shuttles (Posse Ground to Soldiers Pass, Dry Creek and Mescal trailheads and 179 at Bowstring to Cathedral and Little Horse trailheads) were explained, noting that when they are in operation, Cathedral and Soldier Pass trailhead parking lots will be closed.

Collaborative Planning for OHV Management: A shared path forward among many stakeholders is now in process with a projected timeline of 6-18 months. A number of organizations have stepped up with enthusiasm to assist. In answer to questions regarding a hiatus or pause in OHV’s on the damaged forest service roads, Amy explained that all licensed passenger vehicles (including OHV’s) have equal right to use forest service roads that are managed for passenger vehicles. It is possible however to limit access to roads designated for high clearance vehicles (e.g. Broken Arrow), but the regulation process can take years to complete.

Wildfire Mitigation Staff: The presentation concluded with good news that the USFS will be recruiting for five new permanent positions this spring and six new temporary/ seasonal crew members next spring. The additional staff will expand their ability to provide community Firewise programs.