Trapped in Subaru, javelina goes for a ride 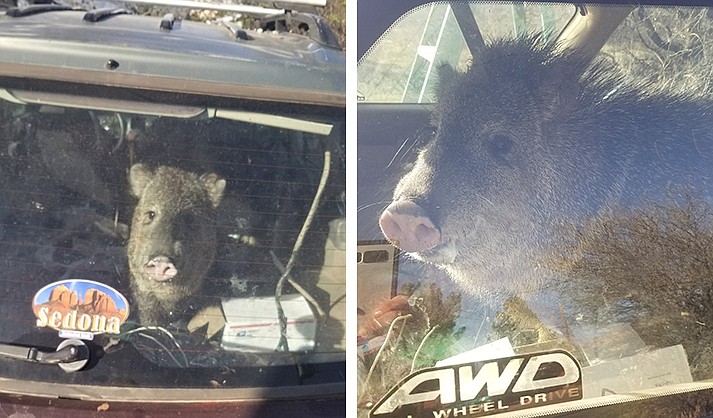 CORNVILLE - A javelina accidentally took a Subaru on a brief joyride after getting trapped inside, according to Yavapai County Sheriff’s Office.

A deputy was called to an address in Cornville Wednesday, April 6, on the wildlife complaint. The javelina was still stuck in the vehicle, a Subaru Station Wagon with California plates, when law enforcement arrived. The deputy freed the animal.

The vehicle owner and neighbors told the officer the back of the car had been left open overnight. Food in the vehicle, reportedly a bag of Cheetos, drew the javelina inside.

The javelina reportedly tore off the interior of a passenger door and a piece of the dashboard before knocking the Subaru out of neutral. Howard said the car rolled out of the driveway, across the street and under some trees.

“We are happy to report, no one was hurt during this escapade, including the animal,” Howard stated. “The deputy safely opened the hatch, allowing the javelina to carefully jump out and run off back into the wilderness.”

Also called collared peccary, javelina are generally two feet tall and weigh 35-55 pounds, according to the Arizona Sonoran Desert Museum. They are not pigs but have similarities and most often travel in herds.

They are usually herbivores. People are discouraged from feeding them so they do not become comfortable in residential areas and cause conflict that could be dangerous for the javelina.

Also, residents are encouraged to close and lock their vehicles at night.