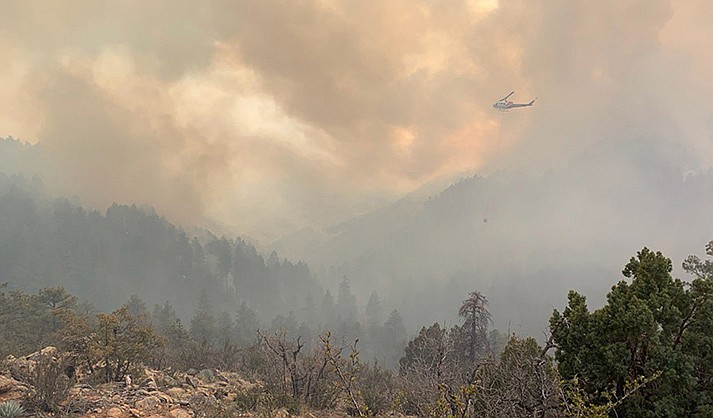 The Crooks Fire in Prescott National Forest south of Prescott is a source of smoke gathering in the Verde Valley. PNF photo

Smoke has been gathering in the Verde Valley from wildfires in other areas of Northern Arizona.

The Crooks Fire south of Prescott, first reported Monday as 4 acres, billowed to over 600 acres Tuesday. According to Prescott National Forest, the Crooks Fire spread in the north-northeast direction driven by strong winds and threatening several areas.

“Fire behavior can be unpredictable, and fire managers are asking the public to exercise caution and steer clear of all areas that could be impacted by the Crooks Fire,” PNF stated in a news release. Recreational sites around the area have been closed.

Meanwhile, the Tunnel Fire north of Flagstaff is over 6,000 acres and prompting evacuations. It is at 0% containment. It is also exacerbated by fierce winds and moving across U.S. Highway 89. That road is closed between mileposts 425-435, so motorists traveling toward Page will need to find an alternate route.

Structures threatened include the community in Doney Park near the fire.

Both fires have drawn professional and volunteer fire units.