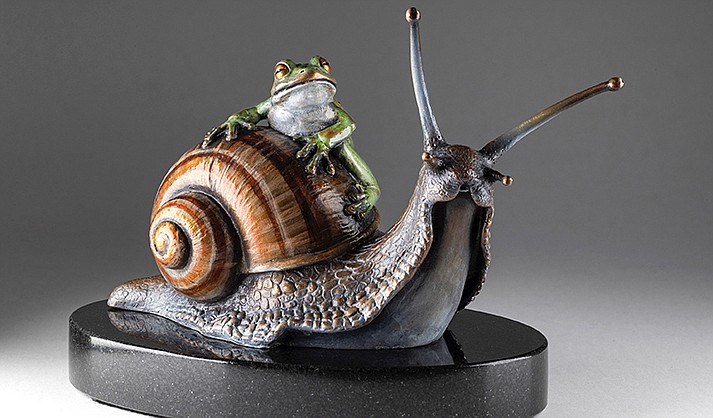 Perhaps it’s due to the pioneer spirit that seems to be woven into the fabric of the American West.

Or maybe it’s because of the area’s rich legacy of indigenous artwork. Or we could even chalk it all up to Georgia O’Keeffe. But no matter the narrative, the Southwest has a rich legacy of inspiring and fostering female artists. In May, Rowe Fine Art Gallery proudly celebrates that heritage with its first show focusing solely on women in the arts. Femme Powered opens Friday, May 6, at 4 p.m. (just in time for Mother’s Day!), and continues throughout the month.

Participating artists include sculptors Shirley Eichten Albrecht and Kim Kori; painters Julie T. Chapman, Kim Diment, Jen Farnsworth and Amy Ringholz; and jeweler Jennifer Inge. We recently chatted with some of these artists about how being a woman has impacted their artwork.

“I am not sure if being a woman has impacted my art,” admits Eichten Albrecht. “I know as a woman, there were times that I had to prove I could compete in the business world, but I never felt that way about the art world. I was raised by a very strong-minded mother, and it has carried me throughout my life. When I was earning my degree, I actually took classes that were typically men’s courses – welding, automotive and woodworking – and enjoyed all that I did and learned. I was the only female in the classes. And that reminds me of a conversation I had with my mom where I told her that if she did not want me to be so independent, she shouldn’t have raised me that way.”

Bronze sculptor Kim Kori has had a bit of a different experience, partly, she says, because foundries have traditionally been male dominated. “I began sculpting in the early 1980s, and when I was treated as unimportant, I didn’t quit,” says Kori. “In 2004, I took part in an American Women Artists show, and my sculpture received a Certificate of Recognition award. At first, I wasn’t sure why women needed to be separated from men. Shouldn’t all good artists be treated respectfully? But I stayed with American Women Artists and was invited to be a Master Signature member in 2014. I’ve learned from this organization, including the interesting fact that, in America, more than half of today’s working artists are women, but artwork created by women makes up less than 5% of the art in museums.”

During Femme Powered, Kori will reveal the precast version of Rapid Transit. If that name sounds familiar to you, you are undoubtedly a Kori collector. A smaller version of Rapid Transit was released in 2020. The sculpture features a frog catching a ride on the back of a snail’s shell. Kori is currently working on a larger version – approximately 24 inches wide by 18 inches tall by 11 inches deep – of the same sculpture. The new version will be suitable for display indoors or outside.

Painter Julie T. Chapman says she’s experienced bias when it comes to getting her work into shows, but she credits that with allowing her to experiment with her medium in ways male artists might not feel free to do.

“I think being a woman has had a profound influence on my work as an artist in the wildlife/western genre,” says Chapman. “I’ve wanted to be in some of the big prestigious shows, but they have (historically) tended toward a gender preference and traditional techniques and subject matter, meaning I had no chance of getting in. In some ways, this has freed me to be exploratory in my work, to follow where the muse leads. First I developed my voice in scratchboard, and then it led to my disrupted-realism paintings – and both oeuvres have been deeply satisfying to me. I’m incredibly gratified and humbled at the reaction the disrupted-realism pieces are receiving; I never expected to be in the situation of turning away gallery representation. I only wish that I were able to work faster.”

Jen Farnsworth echoes Chapman’s experience about the ability to experiment with technique and even color and medium. Farnsworth has recently branched out from oils to stretch herself by experimenting with mixed media; the new artwork will be on exhibit during the show.

“One of the great joys I have in making art is when I can be fearless and push the boundaries with color and composition as I try to capture the essence of my subject matter,” Farnsworth says. “Beyond oil, I am having a lot of fun lately experimenting with graphite, ink, alcohol and tea. Not only can I continue to use the bright, bold and expressive colors I love, but these materials themselves are so spontaneous, the art unfolds on its own.”

Kim Diment believes being a woman has helped her see her wildlife subjects in a different light. “I think, as a female, I see more of a personality in my animal subjects,” reflects Diment. “I see humans and animals both exhibiting emotions. Many people think animals are purely instinctual, but I believe animals, like people, have instincts as well as personalities not dictated by instincts. I think that belief shows in my work.”

Amy Ringholz says that being a woman and a mother have had an equal influence on her paintings, but she doesn’t necessarily dwell on it – nor does she want her viewers. “I love being a female artist,” she declares. “I sign my pieces ‘Ringholz’ mainly to make my father proud – or annoyed because he once told me I stole his signature [laughs]. But by choosing to not put my first name on the piece, it allows the viewer to first just love the work.

“Being a woman and a mother, I feel like I steer the artwork like I would a child,” she continues. “Creatively, I live to make art. I create and fight for and protect the work like I would a child. I look out for it, plan its future, guide it and keep it on track. The fulfillment I feel from being a female artist has made me who I am. The challenges that have come with making a living from it have built my character and that is what I use as an example for my actual children. Art making is the story of my life.”

Come see what these exemplary artists are creating throughout May.

Rowe Fine Art Gallery represents traditional and contemporary southwestern artists. The gallery, located under the bell tower in Patio de las Campanas at Tlaquepaque Arts & Shopping Village, is open Monday through Thursday, 10 a.m. to 5 p.m., and Friday through Sunday, 10 a.m. to 6 p.m. For more information, call 928-282-8877, visit RoweGallery.com, or find us on Facebook, Instagram and Twitter.