The Village Gallery: The Girl with Kaleidoscope Eyes 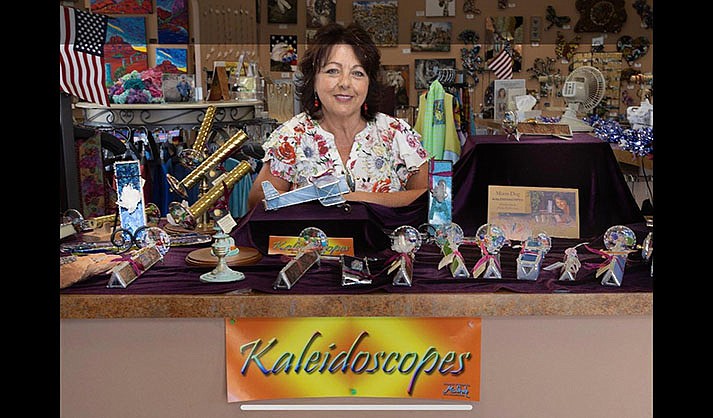 Have you ever looked into the fractured soul of a kaleidoscope?? Looking through one of these masterpieces transports you into a magical, colorful world. They are beautiful to look at and look through. Each one is handmade with love and is sure to be a cherished heirloom.

Please join us at our First Friday event featuring the very special kaleidoscopes crafted by local artist Linda Bellacicco, Aug. 5 from 6 to 8 p.m. There will be a raffle at this event for a free kaleidoscope. The drawing will be held at 6:30 p.m. — you must be present to win. 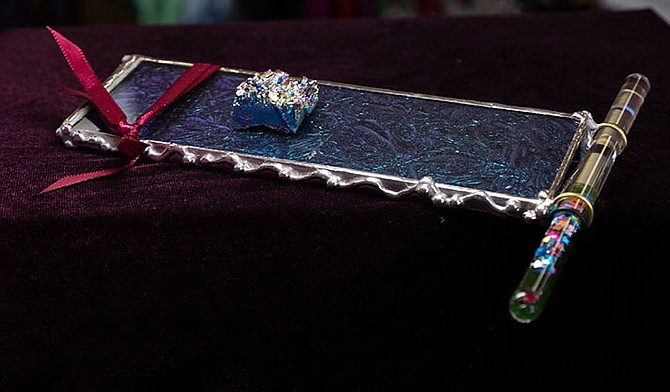 Art has always been part of Bellacicco’s life. Her grandfather was a shoe designer for a Paris company based in the Empire State Building, in Manhattan. He exposed her to colors, textures, composition, and form. It’s no wonder she embarked on an art career, graduating from St. John’s University with a Bachelor of Fine Arts and Advertising. She worked at several advertising agencies in Manhattan. In 1983, she won the coveted Clio Award for packaging design.

Bellacicco always admired stained glass, especially Tiffany’s works. By coincidence, she grew up one block from the former Tiffany studios. In 1984, Bellacicco enrolled in a stained-glass class and was hooked immediately. She eventually opened a stained-glass studio with her teacher in Long Island. They taught classes, sold all the tools and supplies, did commission work and made all forms of stained-glass gifts including kaleidoscopes. The kaleidoscopes became a best seller. She named her new kaleidoscope business Moon Dog Kaleidoscopes.

Kaleidoscopes were invented and patented in Scotland by Sir Brewster in 1816, who was an optical scientist. One invention was the kaleidoscope. He developed a very special mirror configuration that creates a kaleidoscopic view. His parlor kaleidoscopes were the rage and sought after by the wealthy. Legend claims that kaleidoscopic images were made by the early Egyptians as well. They would polish slabs of limestone and place them together in different angles and become bewitched watching as Mandalas of colors and human dancers would form.

Kaleidoscopic images are fascinating for adults and children as well. Toy kaleidoscopes became very popular in the 20th century. The American GIs carried them post-WWII and introduced their magic to children around the world. They were mass produced and inexpensive and were popular toys of that time. Many of us remember vividly as children looking through one and being amused for hours by the ever changing patterns and colors. Today the kaleidoscope is still made as a children’s toy and also as an adult collector’s item. The latter are made of precious, expensive items and produce an array of illusions.

In the mid-20th century, with the advent of the space program, special mirrors were developed for space telescopes that produced a crystal clear and very focused kaleidoscopic view. These are the same mirrors that Bellacicco uses in her kaleidoscopes. Bellacicco works mostly in stained glass incorporating whimsical decorations on the kaleidoscope body. She has been making and selling kaleidoscopes in Sedona for 30 years and was originally attracted to Sedona as it was a calm, safe place with a supportive artist community. She resides in the Village of Oak Creek with her husband Robbie and their two dogs.

The Village Gallery is located at 6512 State Route 179 in the Village of Oak Creek at the Cortez roundabout. Please stop by to see Bellacicco’s unique work and enjoy the work of 40 other local artists. The Gallery is open seven days a week from 10 a.m. to 6 p.m.