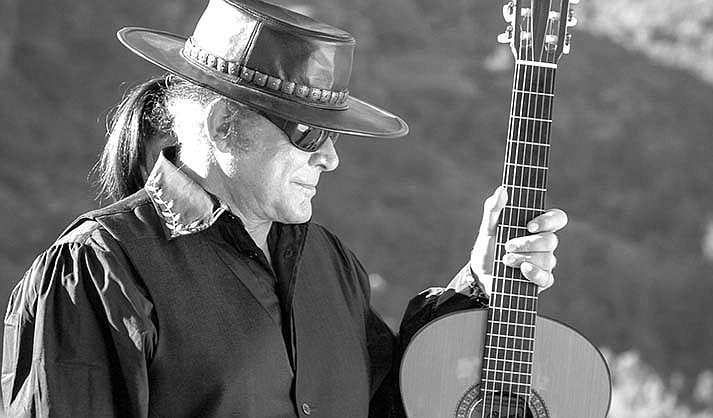 Esteban is considered one of the most talented Flamenco guitarists in the world. He is a living legend for classical guitar music aficionados, having played and toured all over the world.

A common household name in the realm of music there are few who haven’t heard of him and now he is here in Sedona where we can watch him play up-close and personal on one of the finest stages in Northern Arizona.

He will be performing with his violinist daughter Theresa Joy, a master violinist; and backed by a four-piece band. Together they weave a beautiful tapestry of instrumental classics that take you on a musical trip through some of the most beautiful songs ever written.

Watching him and his band play is a hypnotic experience as he journeys through the musical world of classical guitar-themed music.

He keeps the audience enthralled with anecdotes of each of the pieces he pays and history about himself and his musical journey.

Esteban began playing the guitar at the age of ten and studied under famed classical guitarist Andres Segovia.

A true prodigy, it wasn’t long before he made a name for himself in the classical guitar world.

Through the years he just keeps getting better and better as he further masters the instrument he plays so well.

He has recorded and sold numerous albums and has played major venues all over the world.

Living in Sedona, Esteban and his daughter regularly perform at Sound Bites Grill, enthralling audiences with their virtuoso performances and passionate playing.

Be prepared for a musical experience you will long remember.

Sound Bites Grill is located at the Shops at Pinon Point adjacent to the Hyatt in Sedona. For more information please visit SoundBitesGrill.com or call 928-282-2714.